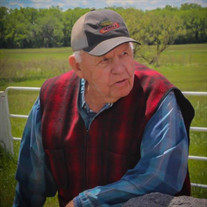 Joseph Lawrence Giles was born April 14, 1926, at the family ranch 1/2 mile west of Elsmere, Nebraska to Charles M. and Astrid E. (Stav) Giles. He was delivered by a midwife, Mrs. Paul Huffman. Joe began working in the hayfield at the age of seven with a team of horses and continued to work well into his 90s at whatever needed done on the ranch and farm. In his early teens, driving the cattle on horseback to the railroad in Halsey was a special event. Growing up, he had many adventures with his brothers, including whitewashing their straw hats one summer and knocking over the fish tank while running through the dining room. Joe went to school at Center Elsmere and graduated from the 8th grade at 12 years old. When taking exams there, he met 12-year-old Bonnie Keys, who later became the love of his life. When his two older brothers were finishing high school, Joe stayed home for two years and trapped skunk, muskrat, and mink, and worked on the ranch. He sold furs and hides and slowly started his own cow herd. Due to the war, Joe had to start and stop high school several times, but he made it through and graduated from Ainsworth High School in 1945. Bonnie Arlene Keys and Joseph Lawrence Giles were married at her parents' home on September 16, 1945, and were married for 63 years. After their marriage, Joe continued working for his father on the family ranch. He and Bonnie lived on the Huffman place when Jo Lynn, Karen Ann, Jerry Michael, and Marcia Sue were born. In the spring of 1958, the family moved to their place one mile west of Ainsworth, where their last child, Erin Lee, was born. Joe was a progressive cattleman and farmer, implementing new techniques and equipment whenever he could. His land and cattle were his heart and soul. Joe served on the Ainsworth School Board, the Ainsworth Irrigation Board during the construction of Merritt Dam, and the Board of Directors of the Commercial National Bank. He was a longtime member of the United Methodist Church, the Elks Lodge B.P.O.E. 1790, the Nebraska Angus Association, the Nebraska Cattlemen's Association, and the American Angus Association. He enjoyed daily rounds of local businesses and never turned down a game of cribbage. He welcomed his nephews into his home during their high school years and spent many hours playing cards with them. He took his kids with him irrigating, haying, in the combine, checking pastures, or anywhere he might be going. He loved Bonnie's cooking, a good visit with friends, and lying on the floor to watch TV while letting the grandkids climb all over him. He often shared many words of wisdom: Don't buy anything unless you can pay for it; Save money for a rainy day; It doesn't cost a thing to be nice; Be honest in whatever you do; Be the best that you can be. Joe passed away on May 21, 2021, at his home, which was his great wish. He was preceded in death by his wife, Bonnie; son, Mike; parents, Charley and Astrid Giles; brothers and sisters-in-law, George and Marylou Giles and Charles and Ina Jean Giles; sister and brother-in-law, Bonnie and Keith Keys; brother-in-law, John Sullivan; sons-in-law, Roger McCoy and Jerry Nance; and grandson-in-law, Korey Schow. Survivors include daughters Jo McCoy of Ainsworth, Karen Nance of North Platte, Marcia Speck and husband Rod of Gothenburg, and Erin Allen and husband Terry of Ainsworth; eight grandchildren, Roxy Schow, James (Mandy) McCoy, Scott Speck, Adam Speck, Nathaniel (Leah) Allen, Lydia Allen, Benjamin Allen, and Gabriel Allen; two great-grandchildren, August Schow and Ruby Schow; sister, Ruth Sullivan of Broken Bow; brother-in-law, Ted Keys and wife Marlea of Elsmere; and nieces, nephews, and other family members. Funeral Services were held on Wednesday, May 26, 2021 at the United Methodist Church in Ainsworth with Pastor David Randall officiating. The CD Selection played was “Growing Up On Goose Creek” by Mike Baxter. Casket bearers were: James McCoy, Scott Speck, Adam Speck, Nathaniel Allen, Benjamin Allen and Gabriel Allen. Honorary Casket bearers were: Roxy Schow, Lydia Allen, August Schow, Ruby Schow and all of Joe’s other family, caregivers and friends. Memorials were suggested to the family in Joe’s name for a future designation. Interment was in the Purdum Cemetery at Purdum, Nebraska under the direction of the Hoch Funeral Home of Ainsworth.

Joseph Lawrence Giles was born April 14, 1926, at the family ranch 1/2 mile west of Elsmere, Nebraska to Charles M. and Astrid E. (Stav) Giles. He was delivered by a midwife, Mrs. Paul Huffman. Joe began working in the hayfield at the age of... View Obituary & Service Information

The family of Joe L. Giles created this Life Tributes page to make it easy to share your memories.