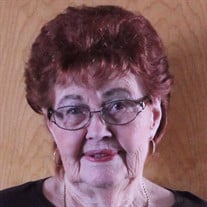 Joanne Gracey passed away December 26, 2019 at the Brown County Hospital in Ainsworth, Nebraska at the age of 90. She was born to parents Archie R. Parr and Lois Tooker Parr on July 10, 1929 in Merna, Nebraska. After graduating from Merna High School in 1946, Jo (as she preferred) married Herbert Staab and had a son, Michael. She worked for Northwestern Bell for several years, living in Broken Bow. In 1953, she married Ralph D. Gracey and had two sons, Mark and Cameron. In 1958, they moved to the Sandhills in Cherry County where they ranched. In 1971, they purchased a ranch south of Ainsworth along the Calamus River where they raised registered Hereford cattle. After retiring, they made home in Atkinson, NE where they enjoyed their family and animals. After Ralph’s passing in 2004, she made home in Ainsworth, where she continued her love of art, music and family. She was a charter member of the Nebraska Arts Club, local art groups, and a volunteer of the Brown County Hospital Auxiliary. Jo was preceded by her parents Archie and Lois Parr, and her husband Ralph. Survivors include her 3 sons and their wives Michael and Christy Staab, Wellington, CO; Mark and Debb Gracey, Ainsworth, NE; Cameron and Mona Gracey, Wellington, CO; eleven Grandchildren, and 13 Great-Grandchildren along with other family members. Her kindness, art work, and love of family will live forever. Graveside Memorial Services were held on Friday, September 18, 2020 in the Ainsworth Cemetery with Pastor Bruce Beebout officiating. The song, “Amazing Grace” by Randy Travis was played. Honorary Urn Bearers are all of Joanne’s grandchildren and great-grandchildren. Memorials are suggested to Brown County Hospital Auxiliary in honor of Jo Gracey.

Joanne Gracey passed away December 26, 2019 at the Brown County Hospital in Ainsworth, Nebraska at the age of 90. She was born to parents Archie R. Parr and Lois Tooker Parr on July 10, 1929 in Merna, Nebraska. After graduating from Merna... View Obituary & Service Information

The family of Joanne (Parr) Gracey created this Life Tributes page to make it easy to share your memories.