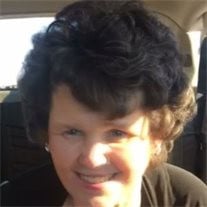 JOLYNN (WHEELER) BUCK JoLynn Buck, 42, of Saint Edward Nebraska passed away October 18, 2017 at Cloverlodge Care Center. JoLynn was born in Valentine, Nebraska to Lyle and Dorothy (McGuire) Wheeler on April 27, 1975, one of eight children. As a child, "Jo" attended grade school in Long Pine where she grew up. She was involved in basketball and later attended Rock County High School. Shortly after school ended she met Richard Zeigler of Ainsworth and they had two children together, Rachel Dawn and Joshua Lee. Jo loved to spend time with family and friends. She considered nobody a stranger. She would give her last dollar to someone in need. She was such a giving and loving person. Jo moved around a little and soon met the love of her life, Wes Buck, they were joined in marriage October 25, 1997. She also gained two step children, John and Trisha Buck. One of Jo's best memories and prized jobs was working at a vet clinic in Fullerton for Jim and Ann Kramer working with "big birds" (ostriches!) JoLynn was on a bowling league for years and absolutely loved it. She won many competitions, she was very talented! She also loved her bingo and would drag anyone along who showed any interest. She really wanted another child so on February 16, 2001, Wes and JoLynn welcomed a baby girl to the family, Haley Lynn. Just a few short months later Jo's world was turned upside down when she had a brain aneurysm rupture, leaving her mentally handicapped. But for anyone who knew her, knew that that didn't stop her from loving everyone full heartedly and living life to the fullest. She was always concerned about everyone else's needs, constantly trying to cheer them up with her goofy and amazing personality and bright smile until the very end. She loved to play UNO, listen to music, the color green, "for money," visit with friends and family, and loved nothing more than her three children. She had such an amazing and inspirational outlook on life even after she was diagnosed with cancer earlier on this year that ended up taking her home to Heaven. JoLynn lived at Cloverlodge Care Center the last year of her life where she met so many wonderful people. She loved all of her family there! She was such a joy to everyone she was around and will be missed dearly. Jo is preceded in death by parents, Lyle and Dorothy (McGuire) Wheeler; and sister, Shelly Lynn. She is loved deeply and survived by her children, Rachel (Justin) Dearmont of Rose, Nebraska; Joshua Zeigler of Ainsworth, Nebraska; Haley Buck of Albion, Nebraska; Stepson, John (Kim) Buck of Albion; Stepdaughter, Trisha Buck of Albion; Husband, Wes Buck of Albion; dear friend Pam Bird of Albion and dear friend Richard Zeigler of Ainsworth; brothers, Shawn (Lenora) Wheeler of Ainsworth; Gerdan Wheeler of Iowa; sisters, Pam (Lonny) Peregoy of Holyoke Colorado, Roberta Wheeler of Norfolk, Nebraska, Kim (Bruce) Koch of Ord, Nebraska, Misty Ryman of Ord, and Cheryl (Ken) Miller of Norfolk; nine step- grandchildren, nieces, nephews, aunts, uncles and cousins. Funeral Services were held at Hoch Funeral Home in Ainsworth, Nebraska with Pastor Georg Williams officiating. Special CD selections of "Take Me Home, Country Roads" by John Denver and "One More Day" by Diamond Rio were provided. Pallbearers were, Grant Buck, Garrett Buck, John Buck, Tray Peregoy, Jonathan Koch, and Travis Cole. Honorary bearers were all of JoLynn's other family and friends. Burial followed at the Grandview Cemetery at Long Pine, Nebraska. In lieu of flowers, memorials were suggested to the family for a future designation.

The family of Mrs. JoLynn (Wheeler) Buck created this Life Tributes page to make it easy to share your memories.