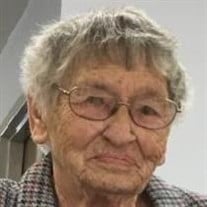 Jo Ann (Lanz) Babcock was born April 4, 1936, in Stuart, Nebraska, to Fred and Emma (Haug) Lanz. Jo was the youngest of three daughters. She and her sisters had many cousins and spent a lot of time with them. She attended rural grade schools south of Bassett, Nebraska finished grade school in Bassett, and graduated from Rock County High School in 1954. She was an active member of speech and drama related activities, FHA, and choir, and was a stellar typist. The family heard many funny stories of her high school years. She worked in Bassett for several years after high school. During this time, she purchased a two-toned yellow and black 1956 Chevrolet Bel Air two-door hardtop coupe. She and Harry “Bill” Babcock of rural Long Pine eloped on May 18, 1959, in Hot Springs, South Dakota, with Bill’s brother and sister-in-law, Harley and Mary Babcock, as their witnesses. Bill and Jo spent most of their married life on the ranch south of Long Pine, Nebraska, which they purchased from Wilma Jean Mengers. Bill and Jo raised their three children, Deb, Lori, and William “Bill” on the ranch. Jo kept busy milking cows, raising and cleaning chickens, scatter raking and running the hay sweep in the hayfield (and packing big lunches for the whole hay crew and the kids), raising large vegetable and flower gardens, canning vegetables, and being the leader of the Rose Scouts 4-H club. Many of Bill & Jo’s nieces and nephews spent time with the family in the country, and have fun memories of birthday parties, riding horses, checking cows, and tubing on the Calamus River. She was “Joey” to many of them. Jo and her friend, Barb Assarsson, painted for other people for some time and took a road trip to Alabama in Lori’s car and returned by bus in the mid-1980s. In the 1990s, Bill and Jo moved to a small acreage three miles west of Bassett. Until retirement, Bill continued to commute to the ranch and Jo worked in Bassett at the Rock County Treasurer’s and Assessor’s offices. She attended grandchildren’s activities locally and drove to Minnesota many times to spend time with her grandsons there. She was grateful to spend time with her sisters, Mary Lou Knoetzel and Alice Allen. Playing cards was a favorite family recreational activity. Jo will be remembered as being stubborn, spunky, and feisty. She was unselfish, fiercely independent, and occasionally used colorful language and expressive hand gestures. She was a hard worker her whole life and got great joy out of her yard, purchasing and using a brand new John Deere riding lawn mower in the summer of 2021. Bill was the love of Jo’s life and family was everything to her. Jo was preceded in death by her grandparents John and Bertha Lanz, and William and Mary Haug, her parents Fred and Emma Lanz, her parents-in-law Harry and Margaret Babcock, sisters Mary Lou Knoetzel and Alice Allen, brothers-in-law Courtney Knoetzel, Harley Babcock, Wally Woodhead and Loren Mercier. Her survivors include; husband Harry “Bill” Babcock of Bassett, son William “Bill” and wife Teresa of Long Pine, NE; daughters Deb Frank and husband Tom of Bassett and Lori Runyon and husband Frank of Onamia, MN.; grandchildren: Nicole Frank, Erin (Chris) Schoenberg, Daniel (Allyson) Frank, Michael (Tay) Runyon, Dallas Runyon, Kyle (Johanna) Babcock, Ashley Babcock; great-grandchildren: Millie, Liam, and Henry Babcock, and Petra and Rowan Runyon; brother-in-law Bill Allen of Bassett, and sisters-in-law Lorene Mercier of Grant, NE, and Mary Babcock of Spokane, WA, and numerous nieces and nephews. Jo Ann Babcock died February 24, 2022 at the Rock County Hospital in Bassett at the age of 85 years, ten months and 20 days. Per her wishes, no services were to be held. A Private Family Inurnment will take place in the Grandview Cemetery at Long Pine, Nebraska at a later date. Those wishing to send memorials, they can be made to the Bassett American Legion Post #123, South Pine Volunteer Fire Department or to St. Jude’s in her name. Online condolences may be left for the family on her webpage at www.hochfuneralhome.com. Hoch Funeral Home of Bassett assisted with the arrangements.

Jo Ann (Lanz) Babcock was born April 4, 1936, in Stuart, Nebraska, to Fred and Emma (Haug) Lanz. Jo was the youngest of three daughters. She and her sisters had many cousins and spent a lot of time with them. She attended rural grade schools... View Obituary & Service Information

The family of Jo Ann (Lanz) Babcock created this Life Tributes page to make it easy to share your memories.