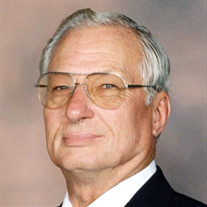 Jimmie D. “Jim” Vonheeder Jimmie Donald Vonheeder was born June 11, 1930 the third child to Edith Jane (Woodcock) Vonheeder and Benjamin Byron Vonheeder in Ainsworth, Nebraska and passed on March 15, 2019 in Sioux City, Iowa with wife and children by his side. Jim spent his childhood in Ainsworth until the family moved to Omaha, Nebraska in 1942 where his parents were employed in wartime jobs. The family returned to Ainsworth in 1945. In June 1947, Jim joined the US Navy and served during the Japanese Occupation aboard the John R. Craig Destroyer. In September 1951, Jim received orders to transfer stateside to the USS Bremerton, a heavy cruiser for service in the Korean Conflict. He was also awarded the China Service Medal. The story of his hitchhiking back to the states from Japan with $23 in his pocket is a story in its own. It was on this furlough, Jim met the love of his life, Jean Mary Halligan and married her on his next furlough in 1952. “From here on it will be we” because that is always how he referred to us. He always kept notes on his hands. The last two things he wrote was “Mom” and “66” for the number of years they had been married. Jim became a father to Mary Jane while on his last tour in 1953. In June of 1954, he received his honorable discharge. At this time, Jim began working for Douglas Aircraft, and we purchased a house in Anaheim, California. Pamela Neile was born in 1956 and six weeks later our family moved back to Ainsworth and he became partners with his father in a tar-paper covered barn at North Ash and Fifth Street, the beginning of Vonheeder Automotive. Jim improved not only the buildings, but sought every opportunity to improve the business. He never failed to help his customers day or night. He appreciated every customer even after selling the business. With his wife doing the bookkeeping, they made a business pair. In 1963, our son, Jimmie Dirk, was born. Jim’s earlier love of racing was rekindled with Dirk when the family began racing sprint cars. He was a great family man and provider for his family. Jim will be remembered for furnishing his family and many other kids with days of water skiing, go-carts, snowmobiling, and rides in Leapin’ Lena. His grandchildren provided many enjoyable hours in their activities, and he never failed to brag about them. He was known as “Grandpa” to more than his own grandchildren. Jim was a member of the Ainsworth Fire Department, American Legion, VFW, Elks, Sun City Kiwanis and Silver Club in which he made sterling silver jewelry for the family and others which will be cherished forever. He and Gene Welke were instrumental in bringing the volunteer ambulance service to Ainsworth. Everyone knew how Jim loved to visit about the old times and businesses in Ainsworth. He appreciated the doctors, nurses, and ambulance crews. Always telling them, “You’re great and Thank You.” He worked hard, played hard, loved and was loved by his wife Jean; daughters Mary Jane Vonheeder, Pamela Scheer and Kevin, son: Dirk and Lori. Grandchildren: Jennifer Vonheeder, Clete and Chancy Scheer, Kema Scheer, Cort Scheer, Bree and Jeremy Rogers, and Ben Vonheeder. Great granddaughters: Talon Scheer and Livi Vonheeder. Also, brothers-in-law, Jack McAndrew, Dewey Halligan, Doug and LaRayne Halligan, Dexter and Shirley Halligan, along with numerous nieces and nephews. Preceding him in death were parents, Ben and Edith Vonheeder, brothers, Lavern and Foster, sisters, Pat Clark and Connie McAndrew. Even though there will be many times we would like to have you here with us, we know you have deserved your Heavenly reward and we must let you go. You will always be with us in our hearts. Funeral Services were held on March 21, 2019 at the United Methodist Church in Ainsworth, Nebraska. Officiating the service were, Pastor David Randall, Pastor Brent Harwerth, and Pastor BJ Kalsbeek. Special music selections were, “How Great Thou Art” by Anthem Lights, “Grandpa” by Granddaughter, Kema Scheer, “Here I Am Lord” by Lisa Wiebesiek, accompanied by Sherry Campbell, and concluded with the congregational selection of “When We All Get to Heaven.” Casket bearers were, Jennifer Vonheeder, Clete Scheer, Chancy Scheer, Kema Scheer, Cort Scheer, Bree Rogers, Jeremy Rogers, and Ben Vonheeder. Honorary bearers were all of Jim’s friends. Special memories were shared. Military Honors were provided by the Ainsworth American Legion Post #79. Interment followed at the Ainsworth Cemetery at Ainsworth, Nebraska. Hoch Funeral Home was in charge of the arrangements. In lieu of flowers, memorials were suggested to the Brown County Ambulance Association, or to the Brown County Veterans Memorial.

The family of Mr. Jimmie D. "Jim" Vonheeder created this Life Tributes page to make it easy to share your memories.