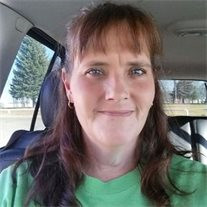 Jessica Tate (Hempel) Anderson, age 43 of Ainsworth, Nebraska, passed away April 20, 2017, at Faith Regional Health Services in Norfolk, Nebraska. She was born April 3, 1974, in Ainsworth, Nebraska, to Richard and Anita Hempel. Jessica grew up with an older sister (Julie) and younger brother (Jared) in Long Pine, Nebraska, where she attended grade school and junior high. She had a very active small town childhood, hiking, tubing the creek, playing basketball, and hosting the famous Hempel slumber parties. She attended Ainsworth High School graduating with the class of 1993. While in high school, Jessica was active in FHA and choir. She had the voice of an angel and loved to sing. As an adult one of her favorite things to do was sing karaoke. Throughout her life she sang for many events and enjoyed gathering around the piano with family for Christmas carols. On March 23, 2002, Jessica married Kevin Anderson. They lived in Bancroft, Nebraska, and were blessed with two children, Seth Tate and Alex Anita. In 2008, Jessica returned to Ainsworth with the children. She kept busy with friends, family, school activities and work. Most recently she worked at the D&B Cafe in Ainsworth. Her coworkers were an extended family for her. Jessica loved fishing and camping her whole life. Her family has many wonderful memories of time spent at the lake with the whole family, Grandma and Grandad included. She also enjoyed going out to bingo with her friends. She was a collector of many things including, cobalt blue glass, tigers, and kitties. Jessica was preceded in death by her grandparents Philip and Marie Hempel and Perry and Phyllis Campbell. She is survived by children Seth and Alex Anderson of Ainsworth; parents Richard and Anita Hempel of Ainsworth; sister Julie (Todd) Taylor of Long Pine; brother Jared Hempel of Ainsworth; friend Derrik Grupe and family of Ainsworth; 2 nieces, 1 great niece and numerous aunts, uncles and cousins. Memorial services were held on April 27, 2017 at the Ainsworth Church of the Nazarene with Pastor Russell Thayer and Elder Roy T. Schrunk officiating the service. Music was provided by Sherry Campbell. Special music selections of "The Lord's Prayer" and "Go Rest High On That Mountain" were provided by Lisa Wiebesiek. A piano instrumental of "Amazing Grace" was also provided by Sherry Campbell. Angela Campbell gave the Eulogy. Singing of the Doxology completed the service. Honorary bearers were all of Jessica's family and friends. Inurnment will occur at a later date. In lieu of flowers/memorials were suggested to the family in Jessica's name. Hoch Funeral Home was in charge of the arrangements.

The family of Ms. Jessica Tate (Hempel) Anderson created this Life Tributes page to make it easy to share your memories.