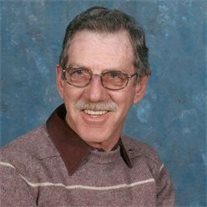 Jerry Alberts was born July 4, 1942 at Ainsworth, Nebraska to Kenneth and Vivian (Reinert) Alberts. He departed this life, December 23, 2012 at St. Paul, Nebraska at the age of 70 years, 5 months and 19 days. Jerry attended Ainsworth High School and Curtis School of Agriculture. He was united in marriage to Sharon Griffith in June of 1963 at Kimball, Nebraska. To this union was born a daughter, Michele. Upon moving back to Ainsworth, Jerry worked for his cousin Bud Alberts, building houses in the area. He also worked at Ranch Land Western Wear before beginning his career with Nebraska Public Power District in December of 1968. On August 27, 1976, Jerry married Geraldine Ruther in Springview, Nebraska. The following year, he adopted Geraldine's son Wade. Born to this union was Kara in 1978. Jerry and Geraldine lived and worked in Ainsworth until 1989, when he accepted a managerial position in Scotia, Nebraska. In 2000, Jerry and family re-located to Loup City, Nebraska until his retirement from NPPD in 2007. Jerry and Geraldine moved back to Scotia in 2008. Jerry soon become tired of retired life and bought a semi tractor and trailer and hit the open road, hauling for Nebraska Salt & Grain throughout Nebraska and adjoining states until he was forced back into retirement due to his health. Jerry was an active member of the Ainsworth Elks Lodge #1790, and worked his way through the chairs to become Exalted Ruler. While a member of the Ord Elks Lodge, he accepted the position of Americanism Committee Chairman for the State of Nebraska, which garnered national honors for its Americanism Chronicles. Jerry proudly served as a Volunteer Fireman in Ainsworth for 25 plus years. While residing in Loup City, Jerry became active in the Mason and Shrine organizations, and enjoyed taking part in community parades to promote awareness of the Shrine's work with crippled and burned children. Jerry dedicated his life to hard work in all of his endeavors and taught his children and grandchildren the importance of hard work and taking responsibilities seriously. Jerry was preceded in death by his father, Kenneth. Jerry is survived by his wife, Geraldine of Scotia; daughter, Michele Just and husband, Ken of Arvada, Colorado; son, Wade and wife, Traci of Ainsworth; daughter Kara Coufal and husband, Lynn of North Loup, Nebraska; along with 11 grandchildren, and one great-grandson. He is also surivived by his mother, Vivian Alberts of Valentine, Nebraska and mother-in-law, Elaine Ruther also of Valentine; a brother, Bob Alberts and his wife, Janet of Long Pine, Nebraska; and two sisters, Sheila Witt and husband, Bob of Valentine and Karen Spanel and husband, Bill of Burwell, Nebraska, along with nieces and nephews. Funeral services were held on December 28, 2012 at the Hoch Funeral Home in Ainsworth, Nebraska. Donnie Painter officiated over the service. Special song selections of "Daddy's Hands" and "My Way" were offered by Ethan Campbell, accompanied by Sherry Campbell, and a CD selection of "I Never Promised You A Rose Garden" by Lynn Anderson. The Eulogy was given by Wade Alberts. Pallbearers were, Mark Stoner, Ryan Welke, JD Alberts, Dustin Spanel, Josh Just and Trey Just. Honorary bearers were all past and present members of the Ainsworth Volunteer Fire Department. Organizational rites were offered by the Silver Cord Lodge #224 AF & AM, and the Ainsworth Elks Lodge #1790. A Graveside followed at 1:30 PM at the Mt. Hope Cemetery in Springview, Nebraska. Memorials were suggested to the family in his name.

The family of Jerry D. Alberts created this Life Tributes page to make it easy to share your memories.