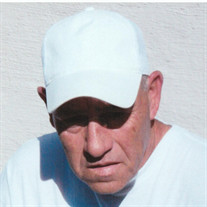 Jerry Lee Clark was born September 9, 1950 at Winner, SD to Marion and Edna (Hartley) Clark. He passed away at his home in O’Neill, NE on September 30, 2019 surrounded by his family. Jerry graduated from Rock County High School at Bassett, NE. He married the love of his life, Sandra Jewell on December 28, 1969. They spent most of their married life in Long Pine, NE. Two children were born to this union, Rodney Scott on December 4, 1971 and Angela Dawn on April 21, 1975. Jerry worked for the City of Ainsworth for 36 years at the Wastewater Treatment Facility. He loved music, playing his guitar and joined the Country Drifters Band playing lead guitar and later he learned how to play the fiddle while traveling with the band. He enjoyed fishing and camping with family and friends. Later, he and Sandra purchased a cabin at Clear Lake spending nearly every weekend there fishing and enjoying life. He especially enjoyed having his grandchildren come who he dearly loved. In 2014, he was diagnosed with Chronic Kidney Disease. In March of 2018, he and Sandra moved to O’Neill to be closer to family and doctors. Jerry was preceded in death by his son Rodney; his parents and a brother Glyn Sr. He leaves to mourn his passing, his wife of 49 years, Sandra; and daughter Angie (Brent) Ertz all of O’Neill; granddaughter Doreena of Portland, OR; grandson, Brandon of O’Neill; step granddaughters Cassie of Auburn, NE, and Madi of Norfolk, NE; a step great grandson Tristan of Auburn; one sister Christy (Scott) Mason of Long Pine; along with several nieces, nephews and other family members. Memorial Services were held on Saturday, October 5, 2019 at the Hoch Funeral Home in Ainsworth with Pastor Jim Loutzenhiser officiating at the service. Music arrangements were: “Take Me Home, Country Roads” by John Denver, “Wings of a Dove” by Ferlin Husky, and “Orange Blossom Special” by the Charlie Daniels Band. Memorials were suggested to the family in Jerry’s name. Online condolences may be left at www.hochfuneralhome.com.

Jerry Lee Clark was born September 9, 1950 at Winner, SD to Marion and Edna (Hartley) Clark. He passed away at his home in O&#8217;Neill, NE on September 30, 2019 surrounded by his family. Jerry graduated from Rock County High School at Bassett,... View Obituary & Service Information

The family of Mr. Jerry Lee Clark created this Life Tributes page to make it easy to share your memories.