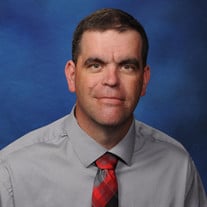 Jeffrey Lee Konkoleski was born February 28, 1976 to Larry and Judy (Vanek) Konkoleski in Ord, Nebraska. He joined two older sisters at home, Pamela and Lori, completing the family of five and becoming the only Konkoleski boy born in his large extended family. Jeff attended elementary school at St. Mary’s Elementary in Ord and graduated from Ord High School in 1994. During school, Jeff enjoyed playing baseball, football, and basketball, and he was part of Swing Choir as he had a wonderful singing voice. Jeff attended University of Nebraska at Kearney and Wayne State College after high school and would later admit that he was not ready for college at age 18. He moved home to work for his sister Pam at her steakhouse in Ord for a number of years. Jeff later felt the calling to go back to school and attained a teaching degree as a high school social studies teacher. He graduated from Wayne State College in December 2004. Jeff met his wife, Brenda (Libolt) Konkoleski, at Wayne, Nebraska where they worked together at Geno’s Steakhouse during their senior year. They were united in marriage on May 31, 2008 in Ainsworth, Nebraska. Jeff was blessed with two living children, Leighton (7) and Aubrey (2), and one angel baby, Cora, to greet him in heaven. Jeff was a loving father who enjoyed spending all his free time away from school in activities with his family. Jeff began his teaching career at Ainsworth Community Schools in 2005. He was a teacher, coach, and activities director during the 10-year career he enjoyed as an Ainsworth Bulldog. “Mr. K” was known to his students as being a tough, but fair teacher who loved playing trash ball, coloring geography maps, and teaching kids about the United States Constitution and Supreme Court cases. Jeff attained his Master’s Degree in Educational Administration in 2012 and ultimately wanted to become a full-time high school principal. Jeff and his family moved to West Point in 2015 as he became the Assistant Principal/Activities Director for West Point Public Schools for the next four years. Jeff loved his work as an administrator and put all he had into helping coaches, sponsors, and students make the most out of their extracurricular activities. Jeff was an avid sportsman who loved fishing, golf, baseball, and Nebraska football. When he was not attending a local sporting event, he was often watching one on the television and cheering for his favorite teams, whether it be the Huskers, Cubs, or Broncos. He dreamed of passing these passions, game traditions, and Husker season tickets on to his children. Two of his biggest sports dreams were answered before his passing, as he was able to attend the Rose Bowl in Pasadena in 2019, as well as watch the Cubs win the World Series in 2016. Jeff passed away on August 8, 2019 at his home in West Point at the age of 43 after a hard-fought battle against Colorectal Cancer. Jeff was preceded in death by his daughter, Cora Konkoleski, father, Larry Konkoleski, grandparents Lloyd and Velma Konkoleski and Jerry and Dorothea Vanek. He is survived by his wife, Brenda (Libolt) Konkoleski, and their children, Leighton and Aubrey Konkoleski of West Point, Nebraska; his mother, Judy Konkoleski of Ord, Nebraska; siblings, Pam (Todd) Zulkoski of Ord and Lori (Russ) Brennick of Scotia, Nebraska; Father-in-law and Mother-in-law, Steve and Cindy Libolt, Grandparents-in-law, Stan and Janice Libolt, and Grandfather-in-law, Bob Tuttle all of Springview, Nebraska, sister-in-law, Amber (Noel) Harewood of Lincoln, Nebraska; nieces, and nephews, Colton and Hailey Zulkoski of Ord, Taylor Williams of Scotia, Amelia and Elijah Harewood of Lincoln, and numerous aunts, uncles, cousins, family, and friends. Funeral Services were held on August 17, 2019 at the Keya Paha County High School Gymnasium in Springview, Nebraska. Officiating the service was Rev. Les Parmenter. Music was brought by Greg Petska providing selections of “In Your Arms,” “The Dance” and “Amazing Grace.” The obituary and special remarks were given by Scott Steinhauser. A video presentation was also shown. The CD selection of “You should Be Here” by Cole Swindell was also provided. Pallbearers were Scott Steinhauser, Dane Sears, Brian Delimont, Doug Veik, John Ely, and Allen Boe. Honorary bearers were past and present colleagues in education. Burial followed at the Mt. Hope Cemetery near Springview. Hoch Funeral Home was in charge of the arrangements. In lieu of flowers/memorials were suggested to the family for a future designation to a scholarship in Jeff’s name.

Jeffrey Lee Konkoleski was born February 28, 1976 to Larry and Judy (Vanek) Konkoleski in Ord, Nebraska. He joined two older sisters at home, Pamela and Lori, completing the family of five and becoming the only Konkoleski boy born in his large... View Obituary & Service Information

The family of Mr. Jeffrey L. "Jeff" Konkoleski created this Life Tributes page to make it easy to share your memories.