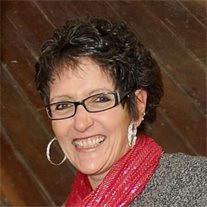 Jean Marie (Maurer) Shankland was born at the Rock County Hospital January 10, 1964, in Bassett, Nebraska to Jake and Marcella Maurer. She joined siblings Janice, Susan, and Jake. Jeanie passed away November 15, 2015, at her home surrounded by family. Jeanie, as she was known to her family and friends, attended Pleasant Hill school through second grade. During the school year, Pleasant Hill and Pony Lake consolidated. She continued her grade school years at Pony Lake graduating from eighth grade. Jeanie then attended Rock County High School graduating with the class on May 16, 1982. After graduating from high school, she furthered her education by attending Northeast Community College obtaining an associates degree in May of 1983. After graduating from college, Jeanie came home and pursued her lifetime career in the business sector of the medical field. Her career took her to Ainsworth, Nebraska, Schuyler, Nebraska, and back home to Bassett. She was the Rock County Hospital office manager for several years and left the medical field for a few short years when she and Gary purchased and ran Huskerland. After selling their business, she returned to the medical field as office manager for Rock County Clinic where she was still employed at the time of her passing. Jeanie was a caring and compassionate person and she was awarded the Caring Kind Award from the Nebraska Hospital Association in October of 2007. Jeanie married Gary Shankland of Hyannis, Nebraska, November 24, 1990 at St. Peter Lutheran Church in Bassett. To this union, three children were born, Payton James, born August 12, 1993, in Norfolk, Nebraska, Jayde Allyce, born May 16, 1997, in Ainsworth and Rhegan Jean, born February 10, 2000, in Valentine, Nebraska sharing a birthday with her great-grandma Alice Sybrant. Gary and Jeanie enjoyed, supported, and took pride in all their kids' activities. They cherished spending time with their family, especially camping and fishing. Jeanie took after her Dad with her love of ice fishing. Jeanie will always be remembered for her smile, her love for family and friends, her occasional mischievousness, and her love for life. Jeanie was preceded in death by her dad Jake Maurer; grandmothers, Alice Sybrant and Lorena Barta. Jeanie is survived by her husband Gary; her children, Payton, Jayde, and Rhegan; mother, Marcella Maurer all of Bassett; sisters, Janice and Harold Devall of Bassett and Susan and JD Hoover of Ainsworth; brother, Jake and Tiffani Maurer of Bassett; father and mother-in-law, James & Malvory Shankland of Hyannis; sister-in-law, Shari Redler, of Lincoln, Nebraska; brother-in-law, Joseph Shankland, of Denver, Colorado, along with numerous nieces and nephews. Funeral Services were held on Thursday November 19, 2015 at the Rock County High School Gymnasium in Bassett, Nebraska. Pastor Melody Brink officiated the service. CD selections of "I Hope You Dance" by Lee Ann Womack and "The Dance" by Garth Brooks were provided. A special tribute to Jeanie was given by Keith Cosgrove. Casket bearers were Ted Thornburg, Mart Hollenbeck, Jerome Murphy, Bim Nelson, Troy Dubs and Keith Cosgrove. Honorary bearers were all of Jeanie's nieces and nephews. Burial followed at the Bassett Memorial Park Cemetery under the direction of Hoch Funeral Home of Bassett. Memorials were suggested to the Sandhills Cancer Fund Inc., Rock County High School Foundation, or to the Rock County Hospital Foundation in Jeanie's name.

The family of Mrs. Jeanie Marie (Maurer) Shankland created this Life Tributes page to make it easy to share your memories.