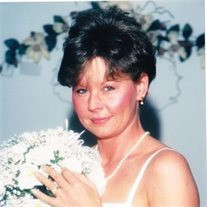 Jayne D. (Burkhart) David our loving wife, mother, grandmother, sister, aunt, and friend passed away on November 3rd, 2013 at her home in Bassett, Nebraska, surrounded by her family after fighting a heroic battle with ovarian cancer. Jayne was born on August 28, 1962 in Pittsburgh, Pennsylvania to Irvin and June (Morhoff) Burkhart. She was one of seven children. Jayne married Terry David on February 23, 2000 at Las Vegas, Nevada. She worked as a cook for the Rock County Senior Center. Jayne loved animals, hunting, fishing, camping, but most of all spending time with her family. Spending time with her husband, sons, daughters, and grandchildren made her heart light up and that beautiful smile of hers spread across her face. We will miss her dearly. Jayne was preceded in death by her parents. She's survived by her husband Terry of Bassett; son Lawrence Bourquin and wife Regina of Pennsylvania; son, Jason Bourquin and wife Crystal of Bassett; daughter, April Burkholder and husband Russ of North Carolina; daughter, Brook David of Iowa; brother, Robert Burkhart and wife Beth of Pennsylvania; brother, John Burkhart and wife Edith of Pennsylvania; brother, Ralph Burkhart and wife Mary of New Jersey; sister, Kathy Hoffmann of Pennsylvania; sister, Judy Richter and husband Dale of Pennsylvania; and Karen Burkhart of Pennsylvania. Father-in-law, Lyle David of Bassett; Brothers-in-law, Billy David of Bassett, and Tim David and wife Mary of Norfolk, Nebraska. A Celebration of Jayne's life was held Saturday, November 9, 2013 at the Emmanuel Community Church in Bassett. Music was provided by Ellen Carpenter. "Mansion over the Hilltop" was provided by the Singing Seniors, and CD selections of "It's A Wonderful World" by Louie Armstrong and "I Won't Let Go" by Rascal Flatts was also provided. Pallbearers were, Dale Caskey, Rich Schmidt, Dean Crabtree, Dean Summerer, Mike Skulavik, and James Kleinberg. Burial followed at the Grandview Cemetery in Long Pine, Nebraska under the direction of Hoch Funeral Home of Bassett. The family wishes to extend their sincerest gratitude to all those who helped care for Jayne.

The family of Mrs. Jayne D. (Burkhart) David created this Life Tributes page to make it easy to share your memories.