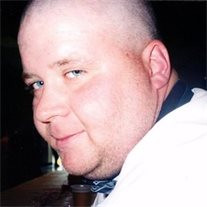 Jason Keith Lauer was born to Jim and Barb (Kops) Lauer on October 6, 1976 in Bassett, Nebraska. He passed away surrounded by family on April 2, 2018 at Madonna Rehabilitation Hospital in Omaha, Nebraska. From the time he was a little boy, Jason had a mischievous streak, a contagious chuckle and a heart that continued to grow with love as he added endless friends and family to his life. Jason graduated from Ainsworth High School in 1994, and attended Mid-Plains Community College in North Platte. He was a talented meat cutter, worked at a dairy for a time, and spent the last few years in Ainsworth working on the farm with his dad. In 2000, Jason married Veronica Ortiz, and together they had one child, Tessa Jean. Jason also loved her other three children, Teyana, Tabitha and Triv as his own. In May 2012, Jason and Heidi Boon (Braun) were married, and he added her children, Courtney and Kaleb to his family. Jason enjoyed cooking, playing cards, and spending time with friends and family. He had many happy memories of working with his two grandfathers on their ranch and farm. He loved spending time at Hidden Paradise, and he gave the best bear hugs. He is preceded in death by his grandparents, Harold and Ardath Lauer, and his grandfather, Lyle Kops. Jason is survived by his wife, Heidi Lauer, children, Tessa Lauer, Courtney Lauer, Kaleb Lauer and grandson Cooper, all of Ainsworth; parents, Jim and Deb Lauer of Ainsworth, and Barb and Bill Merritt of Omaha; sister, Alissa Johnson and husband Shawn of Syracuse; sister, Megan Killion and husband Ryan of Kearney; and brother, Aaron Lauer of Coral Gables, Florida; grandmother, Jean Kops of Lincoln; five nephews, one niece, and countless friends and family who loved him. A Celebration of Life was held at the Evangelical Free Church in Ainsworth at 10:00 A.M. on Saturday, April 7, 2018. Pastor Scotty Clark, Pastor Matt Meister, and Bernie Martin officiated the service. CD selections of "Oh Happy Day" by The Edwin Hawkins Singers, and "My Church" by Maren Morris. His ashes will be scattered at a later date. In lieu of flowers, memorials may be directed to the family for a donation to a cause of the family's choosing. Hoch Funeral Home of Ainsworth assisted with the arrangements.

Jason Keith Lauer was born to Jim and Barb (Kops) Lauer on October 6, 1976 in Bassett, Nebraska. He passed away surrounded by family on April 2, 2018 at Madonna Rehabilitation Hospital in Omaha, Nebraska. From the time he was a little boy,... View Obituary & Service Information

The family of Mr. Jason Keith Lauer created this Life Tributes page to make it easy to share your memories.

Jason Keith Lauer was born to Jim and Barb (Kops) Lauer on October...