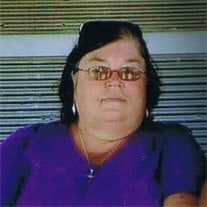 Janice Ione Schwager was born on February 1, 1960 in Bassett, Nebraska to Elmer L. and Helen Ione (Harlan) Schwager of Mills, Nebraska. In November of 1960, Elmer, Helen and Janice moved to Ewing, Nebraska to Elmer's parent's home place. In February of 1961, Janice became a big sister to Judy Kay two days after her 1st birthday. Helen always dressed them like twins. In 1962, the family moved to a place south of Bassett. Then, in the fall of 1962, they moved to Keya Paha County and in 1965 the family settled in Springview. In November of 1965, the family was in a car accident in which Janice was severely injured. She was flown to Omaha with head injuries where she was in the hospital for nearly a month. In 1969, Janice became a big sister again to Joann Sue. Janice attended both Springview Grade School and Keya Paha County High School graduating in the class of 1978. After graduation, Janice worked at the Range Cafe in Bassett for a short time before returning to Springview to do home health care for Rena Mock. She then moved to Valentine where she worked several jobs before becoming an employee of Alco. She worked at Alco for almost 25 years before it closed. This last summer, Janice worked at Smith Falls State Park in the office and was currently working the front desk of the Niobrara Lodge. Janice loved crocheting beautiful things, spending time with her family who she loved very much, going to coffee with her best friend Linda and most of all keeping her little sister Joann in line which wasn't easy. Janice passed away November 22, 2015 in Kearney, NE at the age of 55. She was preceded in death by her mom, Helen in 2006. Janice is survived by her dad, Elmer Schwager of Springview; sisters, Judy Schwager of Springview, and Joann Schwager of Valentine; an uncle, Otis (Jim) and aunt, Nancy Harlan of Bassett, aunts, Alta Simons and Violet Sullivans of Oregon, uncle, Walt Schwager of Iowa, aunt, Leona Villines of Kansas, aunt Ruthie Warner of Loup City, Nebraska; special cousin, Jeannette Harlan of Box Elder, South Dakota, and Jim and Barb Schaefer of Pierce, Nebraska. Janice always referred to Jim as her big brother and to Jeanette and Barb as her two other sisters. She is also survived by numerous cousins and friends. She will be greatly missed. Memorial Services were held on Saturday, November 28, 2015 at the Hoch Funeral Home in Ainsworth with Pastor Jesse Meduna officiating. Music was by Kristen Meduna providing the selections, "On The Wings Of A Dove," "In The Garden" and "The Old Rugged Cross." Honorary Bearers were: All of Janice's Cousins and Linda Vaughn. Inurnment followed in the Mt. Hope Cemetery at Springview. Memorials were suggested to the family in her name.

The family of Miss Janice I. Schwager created this Life Tributes page to make it easy to share your memories.