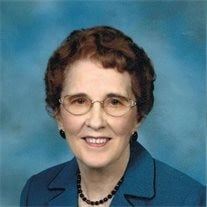 Janet Frances (Nelson) Connery was born on July 13, 1930 with sand between her toes at home on the Clark place south of Ainsworth, Nebraska. Although she didn't spend her whole life in the Sandhills, her heart was always here. Her husband Roger promised he would bring her back and he did when he retired. Janet passed away on April 13, 2015 at Rock County Long Term Care Center in Bassett, Nebraska at the age of 84 after a 15 year battle with Parkinson's Disease. Janet graduated from Ainsworth High School in 1949 and worked at Penny's until she married Roger Connery on April 23, 1950 in Ainsworth. Janet was very proud of her house making skills and her children. She and Roger moved across the state, Valentine, Chadron, Geneva, Lincoln, David City, and finally back to the Sandhills in Bassett. Janet was well known for her love of dancing, her sewing skills, love of reading, and golfing with her daughter-in-law or anyone who would go with her. Her family was very important to her, so much so, she refused to go until they all surrounded her with their love and she heard their voices and waltz music. Janet was preceded in death by her parents John and Frances Nelson; husband, Roger Lee Connery, and brother, Jack. She is survived by her children, Gregory Lee (Kathy) Wasilla, Alaska, Gaylene Frances (Edward Pat) Kokal, Helper, Utah, Roger Scott (Lisa), Bassett, Nebraska, and Brett Michael (Lorrie), Glenwood, Arizona; siblings, Jeannett Solhiem, Mesa, Arizona, Jim(Judy) Nelson, Bassett, and Joe (Betty) Nelson, Long Pine, Nebraska. The family would like to thank all the caregiver/hospital staff and Hospice for the wonderful care they gave. Funeral services were held on April 17, 2015 at the St. Peter Lutheran Church in Bassett with Pastor John Brink officiating the service. Music was provided by Kristie Sybrant-Keller, with special selections of "How Great Thou Art" being provided by Jason Nelson, as well as "On Eagle's Wings" being provided by June Kepler, Jenny and Jacki Connery. Congregational selections were, "Amazing Grace" and "A Mighty Fortress is Our God". Pallbearers were, Justin Kepler, Jeff Nelson, Jon Nelson, Kevin Smith, Justin Nelson, Ryan Nelson and Danne Fernau. Burial was held at the Bassett Memorial Park Cemetery under the direction of Hoch Funeral Home of Bassett. Memorials were suggested to the St. Peter Lutheran Church or to the Rock County Senior Center.

Janet Frances (Nelson) Connery was born on July 13, 1930 with sand between her toes at home on the Clark place south of Ainsworth, Nebraska. Although she didn't spend her whole life in the Sandhills, her heart was always here. Her husband Roger... View Obituary & Service Information

The family of Mrs. Janet F. (Nelson) Connery created this Life Tributes page to make it easy to share your memories.