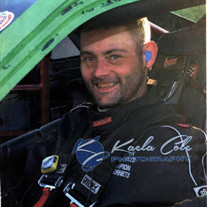 Heaven gained another angel. Jamie was a caring and dedicated son, brother, uncle and friend. Jamie Richard Spanel was born in Ainsworth, Nebraska on March 17, 1979. He attended grade school in Omaha and graduated from Millard South High School in 1997. Jamie enjoyed playing football and wrestling. He spent many summers in Brown County with his grandparents. Jamie was a lifelong racing, fishing and hunting buddy to a lot of friends. He loved hunting deer, duck and geese on Grama Glenna’s ranch. In Omaha, he enjoyed catfishing on the river as often as possible with his buddies. His two golden retrievers, Rusty and Cole were always by his side. Jamie started demolition derby at the age of 15, moving on to NASCAR dirt track, division 4. He always used 15 as his racing number since it was his age at his first race. The following are some quotes of Jamie’s friends have shared. “Jamie had a kind and caring heart.” “Jamie was a man that would do anything for anyone.” “Jamie was a good friend, awesome competitor, team mate, giving his support and friendship to all.” “Jamie was a great person and has touched so many people’s lives.” “If you needed anything, all you had to do was text or call Jamie, he would find it, loan it, or be there. If you need a place to stay, he would say, stay here, if you needed a truck, he would say take mine.” “Jamie will be remembered and truly missed.” If you were lucky to know him, you were lucky! Jamie is survived by his father George, Ainsworth, NE; and mother, Merrilee Graff-Spanel, Omaha, NE. He is also survived by his siblings, T.J. (Shannon) Spanel, Sergeant Bluff, IA, Jodi Spanel, Omaha, NE, Paul (Nikki) Spanel, Lincoln, NE, Mitch (Elizabeth) Spanel, Lincoln, NE; along with nieces, nephews and other family members. Graveside Services were held on Friday, October 2, 2020 in the East Woodlawn Cemetery in Johnstown. Pastor Gary Graesser officiated at the service. Memorials were suggested to the family in Jamie’s name for future designation. Hoch Funeral Home of Ainsworth Assisted with arrangements.

The family of Jamie R. Spanel created this Life Tributes page to make it easy to share your memories.

Heaven gained another angel. Jamie was a caring and dedicated...