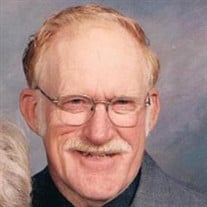 James Henry Shaw was born October 18, 1936 in Ainsworth, Nebraska to Troy Herald and Florida Rose (Jackson) Shaw. He grew up on the Shaw family homestead east of Burton, Nebraska where he attended country grade schools. He attended Keya Paha County High School in Springview, Nebraska and graduated in 1954. In 1956 he entered the US Navy and was assigned to the USS Ashtabula AO51, an attending oiler ship, serving in the Pacific fleet home-ported out of Long Beach, California. While home on leave, his best friend, Kenny Hansen, introduced Jim to his sister, Ella. He was honorably discharged in 1957 and moved back to Gregory, South Dakota, where he worked in Iden’s Body Shop. Jim and Ella had continued to correspond while he was in the Navy and on November 9, 1957 they were married at St. John Lutheran Church in Gregory. A year later on November 16, 1958, a son Martin, was born prematurely, and died shortly after birth. Jim and Ella moved to Bassett, Nebraska in 1959 where he went to work for the Ford Garage. They had four children, Darla Jayne in 1961, James Troy (JT) in 1963, Kirt Matthew in 1966 and Annita Marie in 1972. In 1965 he opened his own business, Bassett Body & Glass, which he operated until his retirement in 2001. After 57 years of marriage, Ella succumbed to her third bout with cancer in 2014. In 2017, Jim moved to the Rock County Long Term Care Center when his Parkinson’s Disease made it impossible for him to live on his own. He passed away on April 20, 2021 at Rock County LTC at the age of 84. Jim was preceded in death by his parents; wife Ella; and infant son; Martin. He is survived by his children; Darla (Charlie) Novotny of Omaha, Nebraska, JT (Kim) Shaw of Bassett, Kirt Shaw of Idaho Falls, Idaho, Annita Wilson of Loveland, Ohio; twelve grandchildren; seven great-grandchildren; sisters-in-law Nola Hansen and Joan Brown of Bassett, Gladys Holley of Fort Worth, Texas and Luan Klemann of Winner, South Dakota, and several nieces and nephews. Funeral Services were held on Saturday, April 24, 2021 at the St. Peter Lutheran Church in Bassett with Vicar Nancy Moore officiating at the service. Music was provided by Evelyn Armstrong with the congregation singing, “Amazing Grace” and “How Great Thou Art.” The CD Selection of “Go Rest High On That Mountain” by Vince Gil was played. Interment followed in the Olive Branch Cemetery at Mills, Nebraska. Military Honors were conducted by Bassett American Legion Post #123. Casket Bearers were: Kinnen Shaw, Steve Hansen, Brad Arrowsmith, Jim Anderson, Rick Carr and Gary Bussinger. Honorary Casket Bears were: All of Jim’s other grandchildren. Memorials were suggested to the Rock County Long Term Care Activities Program or to the Bassett Volunteer Fire Department in Jim’s name. Hoch Funeral Home of Bassett was entrusted with the service arrangements.

The family of James H. Shaw created this Life Tributes page to make it easy to share your memories.