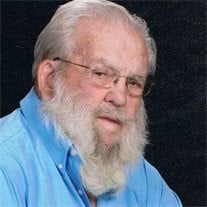 James Ruben Walton was born in Gordon, Nebraska on February 18, 1931 and passed away on February 1, 2016, at the Brown County Hospital in Ainsworth, Nebraska, at the age of 84 years. He was the oldest of three children born to Ruben A. and Dorothy V. (Mielke) Walton. Jim was named after his great grandfather. Jim was raised and attended school in the Gordon area until his early high school years. During his freshman year, he sat out a semester to help out at the ranch while his father was ill. The next year, 1946, Ruben and Dorothy purchased a farm three miles north of Ainsworth. Jim then attended Ainsworth High School until his graduation in 1950. During high school he was active in football, boxing, and F.F.A. Also during one summer of high school, Jim worked in South Dakota helping build Ft. Randall Dam. On June 23, 1951, Jim married Edris P. Williams in Ainsworth. To this union three daughters were born, Debra L., Pamela K., and Lori D. During this time Jim was a lineman for the REA and traveled throughout the Midwest. He and his family then settled in Ankeny, Iowa and started the business Ankeny Insulation and Awning. In 1975, Jim moved back to the Ainsworth area where he started Waltons Siding and Windows and Gov's Gutters. He ran these businesses until his retirement. He was also a part-time reserve deputy sheriff for the Brown County Sheriffs Office. On January 3, 1981, Jim married Ginger Jones in Ainsworth. With this marriage, two step children were added to the family, Allan C. and Angie K. Jones. Jim was an avid hunter and fisherman and enjoyed spending time in the outdoors. Another of his hobbies was raising and showing Appaloosa horses. He also enjoyed going to auctions and collecting cookie jars. One of Jim's passions was collecting, restoring and pulling antique tractors. He enjoyed participating in pulls and was very competitive. Jim was an active member of the Ainsworth Lions Club, held several offices and was on the board of directors for many years. He was instrumental in the Lions taking over and running the concession stand at the Brown County Fair. He was a 63 year member of the United Methodist Church in Ainsworth. His mother, Dorothy was an integral part in the forming of the Ainsworth Senior Center and Jim spent many hours helping the center grow and thrive. Another one of his passions was being Santa Claus. He thoroughly enjoyed bringing the Christmas spirit to kids of all ages. He spent many long hours donating his time and efforts bringing smiles to any little one who wanted to sit on his knee and tell him what they wanted for Christmas. With his white beard he certainly looked the part. James R., is preceded in death by his parents Ruben and Dorothy Walton, daughter Debra L. Chapman, and grandson Tyler J.S. Luna. He is survived by his wife, Ginger of Ainsworth; children, Pamela K. (Roman) Luna and Lori D. Cason all of Des Moines, Iowa; step-children, Allan C. Jones of Yankton, South Dakota and Angie K. (Mark) Teten of Talmage, Nebraska; four grandchildren, seven step-grandchildren, thirteen great grandchildren and one step great granddaughter. Sisters, Shirley J. Crone and Judy K. Cole both of Ainsworth, along with nieces, nephews, other family members and a host of friends. Funeral Services were held on Thursday, February 4, 2016 at the United Methodist Church in Ainsworth, Nebraska. Pastor David Randall and Pastor Gary Graesser officiated the service. Music was provided by Linn Baxter and Jason Nelson. Vocal selections were, "Supper Time" and "Going Home". The Congregational selection provided was, "Old Rugged Cross". The Eulogy was given by nephew, Don Crone. Pallbeareres were, Chad Cole, Don Crone, Mark Kozisek, Greg Soles, Mike Crone, Mark Teten, and Skyler Teten and Lenny Fernau,. Honorary Bearers were, Randy Johns, Bryan Murphy, Don Graham, Jerry Allen, Chuck Malone, Tom Handsaker, Brown County Hospital Auxiliary Thrift Shop Friends and Ainsworth Lions Club. Burial was held in the Grandview Cemetery at Long Pine, Nebraska under the direction of Hoch Funeral Home of Ainsworth. Memorials were suggested to the Brown County Ambulance Association, the Brown County Hospital, or to the Donor's Choice.

James Ruben Walton was born in Gordon, Nebraska on February 18, 1931 and passed away on February 1, 2016, at the Brown County Hospital in Ainsworth, Nebraska, at the age of 84 years. He was the oldest of three children born to Ruben A. and... View Obituary & Service Information

The family of Mr. James R. "Jim" Walton created this Life Tributes page to make it easy to share your memories.

James Ruben Walton was born in Gordon, Nebraska on February 18,...