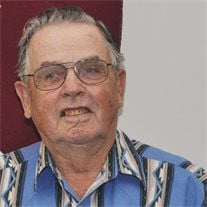 James Luther West, 83 was born January 4, 1932 at Norwich, Iowa to Ben and Hattie (Hardin) West. When he was small, the family moved to Holt, Missouri, returning to Iowa when he was about 3. The family lived in various places during his elementary school years. He and his two youngest sisters attended Clarinda High School. He graduated in 1950 and enlisted in the Coast Guard a year later. James served his country for 3 years, in Cape May, New Jersey, Grand Isle, Louisiana and was honorably discharged from Grand Isle Lifeboat Station, Grand Isle, Louisiana. After his military service, James came to western Nebraska where he visited the Sandoz, and decided to stay. He worked for the Sandoz for several years. It was during this time that he met and later married Shirley Ann Lewis. The two made their first home in Chadron, Nebraska. Through the GI Bill of Rights, James trained to be an electrician. Soon after this, Fritz Sandoz offered James the opportunity to manage his ranch which was located northwest of Chadron. It was there that their first son Jeffrey was born. Later the family was relocated to a ranch north of Taylor, Nebraska where a daughter, Rachel and son, Daniel were added to the family. In 1965 the family purchased a ranch of their own southwest of Johnstown, where James lived until his death on Wednesday, March 25, 2015. James was a member of the Woodlake Union Church and also joined the Gideons International, demonstrating his commitment to the spread of the gospel of Christ. James was preceded in death by his parents, brothers Clifford, Dolton, Elza, and Frank, and sisters Corrine Kendrick, Beda Stogdill, Melody Ridnour, and Maxine Reed. He is survived by his wife, Shirley of Johnstown; 3 children, Jeffrey (Bethanie) West of Omaha, Nebraska, Rachel (Jonathan) Stevens of Wheaton, Illinois, and Daniel (Carla) West of Johnstown; 11 grandchildren, two great-grandchildren; sisters, Mary Symons of Saginaw, Michigan and Ethelene Jones of Warsaw, Missouri. Funeral services were held on March 31, 2015 at the Wood Lake Union Church in Wood Lake, Nebraska. Pastor Don Letellier officiated the service. Music was provided by Anna May Letellier. Special music selections were, "Jesus Love Me" by the grandchildren, "I Can Only Imagine" by Savannah West, as well as a saxophone selection being presented by Chris Wilson. Congregational hymn of "When The Roll Is Called Up Yonder" was also provided. Pallbearers were, Justin West, Joel West, Eli West, Bowde West, Brady West and Honorary bearers were Gideons from the Bassett Camp. Burial with Military Honors were given by the Ainsworth American Legion Post #79 at the Ainsworth Cemetery under the direction of Hoch Funeral Home of Ainsworth. In lieu of flowers, memorials were suggested to the Gideons or to the Wood Lake Union Church in Jim's name.

James Luther West, 83 was born January 4, 1932 at Norwich, Iowa to Ben and Hattie (Hardin) West. When he was small, the family moved to Holt, Missouri, returning to Iowa when he was about 3. The family lived in various places during his elementary... View Obituary & Service Information

The family of Mr. James L. "Jim" West created this Life Tributes page to make it easy to share your memories.