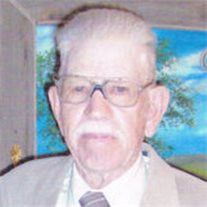 James Otis Harlan was born at home, in the Sybrant neighborhood south of Bassett, Nebraska, on June 4, 1933, to Margaret and Ora Harlan. Mrs. Stout, a neighbor lady, was the midwife; she had delivered most of his seven older brothers and sisters,... View Obituary & Service Information

The family of Mr. James Otis "Jim" Harlan created this Life Tributes page to make it easy to share your memories.

James Otis Harlan was born at home, in the Sybrant neighborhood...