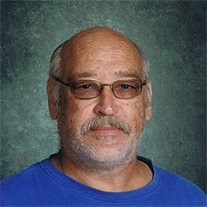 James Howard Clay was born October 13, 1959 to Sarah (Anson) and Howard Clay and passed away on July 1st, 2015 at the Brown County Hospital in Ainsworth, Nebraska, at the age of 55. He grew up on the family ranch southeast of Springview, Nebraska where he attended grade school and graduated from Keya Paha Co. High school. There he met Sheri (Gibson) Clay and were united in marriage July 23, 1980 in Ainsworth. They made their home six miles southeast of Springview. This home was blessed with two sons, Michael and Jared whom he helped deliver enroute to the hospital. He was continuously dedicated to working on the family ranch first by milking dairy cows and later switching to stock cows. His hard work fed many cattle, fixed many miles of fence, and built a couple of tool sheds. His knowledgeable skill as a handyman will be missed by many. He overcame various trials during his life such as relying upon farm income for the duration of the rough economy in the early 80's, rebuilding a new tractor which had suddenly caught fire. He also supported his family through the means of various jobs which included working at the local gathering place, installing irrigation systems, collecting railroad rock, and maintaining the potato plant in Long Pine, Nebraska. He enjoyed the time spent with family, appreciated their help, anywhere from bringing in the cows for milking, spring branding, as well as putting up hay. He spent many years as custodian at the high school in Springview. He loved spending time on the family ranch with his two grandsons, Elijah and Lucas. He is preceded in death by his father, Howard Clay, sister and brother-in-law, Marilyn and Don Frick and niece, Megan Frick. He is survived by his wife, Sheri Clay of Springview; son, Michael (Christy) Clay, grandsons, Elijah and Lucas of Bassett, Nebraska and son, Jared Clay of Albuquerque, New Mexico; mother, Sarah Clay of Springview; brother, Doug Clay (Mark Kane) of Sacramento, California; brother Ed (Peggy) Clay of Wiggins, Colorado, sister Marty (Mike) Clark of Bassett; brother Dave (Karan) Clay of Long Pine, Nebraska; brother Melvin Clay of Arcadia, Nebraska; mother-in-law, Dona Gibson of Springview; brothers-in-laws, Melvin (Kelli) Gibson of Springview, and Alan (Colleen) Gibson of Valentine, Nebraska, as well as many nieces, nephews, and other family members. Funeral services were held on July 6, 2015 at the Keya Paha High School Gymnasium in Springview, Nebraska with Pastor Sam Courts officiating the service. Music was provided by Sam and Mary Courts singing "Remember When" and "Country Roads Take Me Home" as special song selections. The congregational selection of "Amazing Grace" was also provided. A poem and special memories were shared by Michael and Jared. Pallbearers were, Steve Libolt, Stan Cook, Jim Ruther, Larry Titus, Bob Murphy, and Troy Cook. Honorary bearers were all of Jim's other friends and family. Burial was held at the Rogers Cemetery near Springview under the direction of Hoch Funeral Home of Ainsworth.

James Howard Clay was born October 13, 1959 to Sarah (Anson) and Howard Clay and passed away on July 1st, 2015 at the Brown County Hospital in Ainsworth, Nebraska, at the age of 55. He grew up on the family ranch southeast of Springview, Nebraska... View Obituary & Service Information

The family of Mr. James H. "Jim" Clay created this Life Tributes page to make it easy to share your memories.