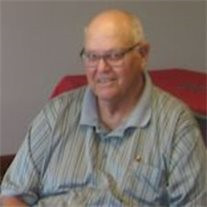 James "Jim" Amaniuel Carr was born on March 1,1935 in Springview, Nebraska to Fred and Edna Lucille (Boshart) Carr. He joined an older brother, John. Jim grew up in the Springview area, graduating from Keya Paha High School in 1953. He then went to the University of Nebraska in Lincoln. He received his Bachelors of Science in Business Administration and began teaching in Scotia, Nebraska. Next he started teaching in Stuart, Nebraska where he later became the Superintendent after receiving his Masters Degree in Administration. After seven years in Stuart, he became Superintendent in Springview and from there he went to Butte, Nebraska as Superintendent. A few years later, Jim quit the educational field and became a full-time rancher. Jim's passions centered around the Nebraska Cornhuskers, Herefords, Republicans and his great-nieces. One of his greatest joys was giving his great-nieces tickets to the Husker games. For over forty years, Jim sold his Herefords to his lifelong friends, the Roeber's. When election years came around, everyone knew what side Jim was on, and he would openly share his opinions. Jim has stated many times that he couldn't continue ranching if it wasn't for the dedication of his right-hand man, Kurtis Mizner. Jim lived on the home place for most of his life, and he always had great pride in his home community. He rarely missed a Keya Paha Alumni banquet. Jim was a longtime member of the Ainsworth Elks Lodge #1790. Jim passed away at his home on May 10, 2017. Jim was preceded in death by his parents and brother. He is survived by his nephew, JD Carr of Yankton, South Dakota, his niece, Jan (Don) Epke of Valentine, Nebraska, sister-in-law, Joyce Carr-Colvin of Valentine, his three great nieces, Kris (Tanner) Tool of Elm Creek, Nebraska, Kasy Epke of Valentine and Kami Epke of Sutherland, Nebraska, along with numerous other relatives. Funeral Services were held on May 15, 2017 with Pastor Rod Heilbrun officiating the service. Music was provided by Karen Hallock. Congregational selections were, "In the Garden" and "Old Rugged Cross." Pallbearers were. Kurtis Mizner, Mark Frick, Byron Roeber, Gary Roeber, Bruce Roeber, Darrell Olson and Chad Ludemann. Honorary bearers were, all of Jim's other family and friends. Burial followed at the Mt. Hope Cemetery near Springview. Hoch Funeral Home of Ainsworth was in charge of the arrangements. In lieu of flowers, memorials were suggested to the Springview Fire and Rescue, or to the Springview Community Center in his name.

James "Jim" Amaniuel Carr was born on March 1,1935 in Springview, Nebraska to Fred and Edna Lucille (Boshart) Carr. He joined an older brother, John. Jim grew up in the Springview area, graduating from Keya Paha High School in 1953. He then... View Obituary & Service Information

The family of Mr. James A. "Jim" Carr created this Life Tributes page to make it easy to share your memories.