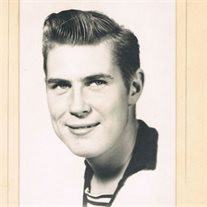 Jacob C. Koch was born on May 06, 1938 in Ainsworth, Nebraska to George and Gertrude (Kurpjuweit) Koch, and died peacefully and unexpectedly at the West Holt Memorial Hospital on October 2, 2015 in Atkinson, Nebraska at the age of 77. Jacob married Bonita D. Beel on June 2, 1957. He worked at the Beel Ranch as a ranch hand. He then worked for Missouri Valley as a Heavy Equipment Operator, helping to construct the Merritt Dam, the Ainsworth Canal and the Glen Elder Dam in Glen Elder, Kansas. The couple welcomed 5 children Jake, Michael, Lori, Rick and Bruce Koch into their home. Jacob and Bonita later divorced. Jacob later united in marriage to Janice. They welcomed 2 children into their home Keri Nissen, and Kris Koch. Jacob and Janice later divorced. Jacob then met Sylvia Cloyd. They lived together until Jacob suffered a stroke. He then moved to Ord, Nebraska where he was close to his children. He later made Long Pine, Nebraska his home. Jacob was a passionate hunter and loved to fly fish. He hunted with his children and grandchildren and great-grandchildren. He loved to sit and watch the deer and other wildlife. Jacob is preceded in death by his parents George and Gertrude (Kurpjuweit) Koch, his half-sister, Francis L. Foster, and brother-in-law Larmour Baxter. He is survived by his children, Jacob Koch and significant other Evelyn Schaaf of Ord, Michael Koch of Grand Island, Nebraska, Lori Hoevet and husband Tom of Ord, Rick Koch and wife Sue of Ord, Bruce Koch and wife Kim of Ord, Keri Nissen of Hastings, and Kris Koch and wife Mary of Edgar, Nebraska; numerous grandchildren and great-grandchildren; sisters, Judy Baxter of Gordon, and Alita Mae Burdick and husband Ben of Johnstown; half-sister Joanne Fredricksen and husband Don of Long Pine; nieces, nephews and other family members. Memorial services were held at Hoch Funeral Home in Ainsworth, Nebraska with Pastor David Randall officiating over the service. Special CD selections of "Kiss An Angel Good Morning" by Charlie Pride, "When I Get Where I'm Going" by Brad Paisley/Dolly Parton, "Angels Among Us" by Alabama, and "I'll Fly Away" by Charlie Pride were provided. Inurnment was held at the Ainsworth Cemetery. Memorials/Condolences (to be designated at a later date) can be sent to Kim Koch 2204 at Dane Creek Drive Ord, NE 68862.

Jacob C. Koch was born on May 06, 1938 in Ainsworth, Nebraska to George and Gertrude (Kurpjuweit) Koch, and died peacefully and unexpectedly at the West Holt Memorial Hospital on October 2, 2015 in Atkinson, Nebraska at the age of 77. Jacob... View Obituary & Service Information

The family of Mr. Jacob C. Koch created this Life Tributes page to make it easy to share your memories.