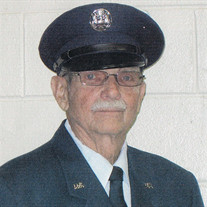 Jackson “Jack” Roark was born on December 23, 1930 in Keya Paha County, Nebraska to Hardie and Fannie (Estes) Roark at his Grandmother Mary Estes’ home. Jack passed away on February 3, 2020 at the Sandhills Care Center in Ainsworth, Nebraska at the age of 89. Jack grew up north of Long Pine on Pine Creek and helped operate the family Dairy Business and graduated from Long Pine High School in 1950. Jack was married to Wardene (Painter) Roark on January 9, 1953. Shortly after, Jack joined the U.S. Air Force in February 1953. Jack loved and was proud of his service in the Air Force, retiring after 22 years of service and attaining the rank of Chief Master Sergeant. Upon his retirement, Jack and Wardene returned to the Sandhills. Jack was very active in community service; belonging to the VFW and the American Legion. Jack was also an active member in Masonic Lodge, the Shriners and the Eastern Star. Jack was very active in helping the City of Long Pine and its residents with projects that were required or needed. Jack enjoyed his cattle, and especially enjoyed hunting and fishing. Jack was preceded in death by his parents Hardie and Fannie Roark; and siblings, Cecil, Dorthea, James, John, Bonnie, Lajean, and Polly. Jack is survived by his wife Wardene Roark of Long Pine; sons, Randal (Pam) Roark of Cheney, Washington and Dennis (Connie) Roark of Keaau, Hawaii; Grandchildren, Michael (Amanda), Nicole, Lindsey, Brittnay, Travis, Silas along with 2 great-grandchildren Alec and Kalleigh; sister Patricia Thompson of Oregon and brother Terry Roark of Idaho and numerous nieces and nephews. Funeral services were held on Saturday February 8, 2020 at Hoch Funeral Home with Pastor Gary Graesser officiating. Masonic rites were performed by the Long Pine Lodge #136. Military Honors were conducted by the Offutt Air Force Base Funeral Honor Guards and the Long Pine American Legion Post #260. Internment was in the Grandview Cemetery at Long Pine under the direction of the Hoch Funeral Home of Ainsworth. The family respectfully requests that in lieu of flowers, memorials in Jack’s honor be made in care of the family to be designated at a later time. Online condolences may be made to the family at www.hochfuneralhome.com.

The family of Jackson M. "Jack" Roark created this Life Tributes page to make it easy to share your memories.