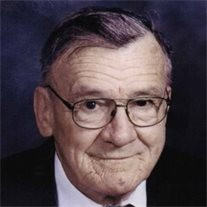 OBITUARY FOR JACK C. CLAUSEN Jack Christian Clausen was born in Long Pine, Nebraska on May 30, 1925 to Mr. and Mrs. James K. Clausen. He passed away July 2, 2013 at his home in Lincoln, Nebraska. The family lived in Long Pine for a time until James and his three sons moved to Chadron, Nebraska to live for several years. It was in Chadron that James married Etta Ann Stowers, who became the boy's beloved mother. The Clausen's moved to Ainsworth, Nebraska when Jack entered the fourth grade. He graduated from Ainsworth High School in the Class of 1943. The day after graduation, Jack and a classmate hitchhiked to Portland, Oregon where Jack worked in the shipyards until being drafted into the United States Army in January of 1944. He received basic training at Camp Walters at Mineral Wells, Texas. From there his unit entered the European Theatre of War at Omaha Beach and began the trek through France on the way to Germany. On September 12, 1944 he was gravely injured while clearing buildings of the enemy at Charms, France. He was air lifted to England where he spent two years in an army hospital in very guarded condition. As his condition improved, he was moved to the United States where he spent the next two years in several military hospitals until he received an honorable discharge in October of 1948. Jack was awarded the medal with three Bronze Stars, the Purple Heart, the American Campaign Medal and the WWII Victory Medal for his service. He returned to visit his mother in Ainsworth early in 1950 and went to work at Randall's Hardware. He met Orva Jean Penn through mutual friends on June 15, 1950. They were married on September 17, 1950 at the United Methodist Church in her hometown of Broken Bow, Nebraska. Their family was blessed with the birth of Jeff in 1953 followed by Jill in 1955 and Jerry in 1957. When the United States Postal Service gave exams in 1957, Jack took the test and was offered the position of Post Master, but opted for Rural Route #2 so he could be outside. He carried his route for a total of 30 years. Upon their retirements, Jack and Jean decided to go south for warm winters making Pharr South, at Pharr, Texas their winter retreat for the next 30 winters. As Jack's health declined, the family decided it was time to return to Nebraska permanently. They gave up their home in Ainsworth, their retreat in Texas and moved to Gateway Senior Living in Lincoln, Nebraska. All of the 64 years Jack and Jean lived in Ainsworth, Jack was very involved in his children's activities (including the trampoline). He was a member of the Ainsworth Elks Club, a 60-year member of the Congregational United Church of Christ, a life member of the Ainsworth American Legion Post #79. His most memorable act for his community was the two years he spent compiling names and addresses of all Alumni members beginning with the first graduation class. This was done on an old portable typewriter one letter at a time in the basement of their home where Jean displayed them. She aided him by finding people by phone. His work revised the Alumni Association which has led to such grand turnouts since the 1970's. Jack was preceded in death by his beloved son, Jeff; his parents, James and Etta; his brothers, James Ward Clausen and his wife, Julia and Donald Eugene Clausen and his wife, Eva. He leaves to celebrate his life his beloved wife, Jean; son, Jerry and wife, Teri; daughter, Jill Shaffer and husband Bruce, and daughter-in-law, Mary Clausen; four grandchildren: Jack and Marcy Clausen, Stephanie and Matt Roth, Katie and Dustin Shepherd and Ali Clausen and five great-grandchildren, Emma, Liv, and Sophie Roth, and Brody and Aubrey Shepherd. Cards can reach Jean at: Gateway Senior Living 225 N 56th Apt #407 Lincoln, Nebraska 68504 Funeral Services were held on Tuesday, July 9, 2013 at Hoch Funeral Home in Ainsworth, Nebraska. Pastor Bruce Beebout officiated over the service. CD selections of "Take My Hand Precious Lord" and "How Great Thou Art" were provided. Honorary bearers were all of Jack's family and friends. Military Honors with flag presentation was give by the Ainsworth American Legion Post #79. A Military Graveside Service was held on Wednesday, July 10, 2013 at the Ft. McPherson National Cemetery in Maxwell, Nebraska, with the Nebraska Army National Guard Funeral Honor Team and the North Platte Veterans Honor Guard.

OBITUARY FOR JACK C. CLAUSEN Jack Christian Clausen was born in Long Pine, Nebraska on May 30, 1925 to Mr. and Mrs. James K. Clausen. He passed away July 2, 2013 at his home in Lincoln, Nebraska. The family lived in Long Pine for a time until... View Obituary & Service Information

The family of Mr. Jack C. Clausen created this Life Tributes page to make it easy to share your memories.