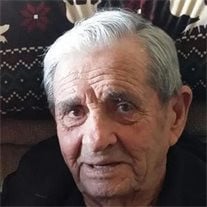 Thomas Joseph "Tom" Lutz was born August 4, 1927 in Plankinton, South Dakota. He was the youngest of five children, born to Lawrence and Ruth (Jones) Lutz. Tom passed away on September 30, 2017 in North Platte, Nebraska at the age of 90. Tom spent his younger years in Plankinton helping his mother on the family farm and attending school. While attending a dance in White Lake, South Dakota, he met the girl who would be his wife for 67 years. He joined the United State Army on September 26, 1946. After completion of basic training in Aberdeen, Maryland, he was transferred to Fort Lawton, Washington and finally assigned to Alaska until being honorably discharged on Sept 12. 1949. Tom and Ruth (Beutner) were united in married on June 9, 1949 in White Lake. Tom always seemed to know a little about everything, from electrical, carpentry, to land leveling. He started the Lutz and Sons Construction Company where most of the employees were his kids, "and boy did that hat of his ever get a beating," (for those that knew Tom, knows what that meant.) And later in life he owned and operated Circle Truck. Tom recently celebrated his 90 birthday with his children and grandchildren being there to share birthday wishes and cake. Tom is preceded in death by his parents: Lawrence and Ruth Lutz, brothers, Melvin and Robert Lutz, sister, Esther Zundel, wife, Ruth Lutz, daughter, Jackie Nagy, and daughter-in-law, Arlou Lutz. Left to cherish his memories are his children, Mike and Laura Lutz of North Platte, Kathy Johnson of Tucson, Arizona, Joel and Jude Lutz of Bassett, Nebraska, Diana Shaul and her fiancé Mike Dickhausen of Brighton, Colorado, Bobbi and Bryan Coleman of Bassett and Sherri VanDiest of North Platte; son-in-law, Dan Nagy of Long Pine, Nebraska; brother, Edwin and Barb Lutz of Sioux Falls, South Dakota; sister-in-law, Dawn Lutz of Manly, Iowa; and brother-in-law, Eugene Beutner of Hot Springs, South Dakota along with 19 grandchildren, 29 great-grandchildren, nieces, nephews and friends. Graveside Memorial Services with inurnment were held on Saturday, October 6, 2017 in the Grandview Cemetery at Long Pine, Nebraska with Pastor Georg Williams officiating at the service. Military Honors were provided by members of the Long Pine American Legion Post #260 and the Bassett American Legion Post #123. In lieu of flowers, memorials were suggested to the Bassett American Legion Post #123. Hoch Funeral Home of Ainsworth assisted with the arrangements.

Thomas Joseph "Tom" Lutz was born August 4, 1927 in Plankinton, South Dakota. He was the youngest of five children, born to Lawrence and Ruth (Jones) Lutz. Tom passed away on September 30, 2017 in North Platte, Nebraska at the age of 90.... View Obituary & Service Information

The family of Mr. Thomas J. "Tom" Lutz created this Life Tributes page to make it easy to share your memories.