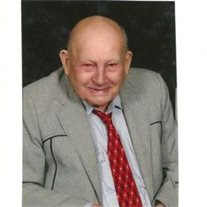 Arnold Krull passed away at the Ainsworth Care Center at Ainsworth, Nebraska on June 30, 2013. He had turned 100 years old in February. He was born in Glenvil, Nebraska to Otto and Lena (Uden) Krull. Arnold was the oldest of 3 children. He grew up on a farm in the Glenvil area and farmed for many years in that same area of Clay County, Nebraska. He married J. Pauline Dill in December of 1936. They had 4 children, Arlene, Marelyn, Richard and Connie. In his later years Arnold and Pauline moved to Glenvil and he worked for Hastings Industries. After retirement, they moved to Good Samaritan Village in Hastings but Arnold continued to hold several part time jobs. He was always a very hard worker and not one to sit idle. His wife Pauline passed away in 1989 after over 50 years of marriage. After several years he married Aurelia Campbell of Ainsworth. He moved to the Ainsworth area and has resided there until his passing. Preceding Arnold in death were his parents, 2 sisters, first wife Pauline, daughter, Arlene Heckman, grandson Mark Heckman and also a great-granddaughter, Amanda Heckman. He is survived by his children, Marelyn (Dick) Baugher) of Holdrege, Nebraska, Richard Krull of Bellingham, Washington, and Connie (Charles) Johnson of Sutton, Nebraska. 7 Grandchildren, 5-Great-Grandchildren, 2-Great-Grandchildren. 5 Step-Children, Susetta (Roger) Almondrode of Friona, Texas, Ruth (Wendell) Downs of Middletown, Missouri, Joyce Harp of Ainsworth, Mark Schneidereit of Booker, Texas, Karen (Bob) Rooney of Brewster, Nebraska. Fifteen Step-Grandchildren, twenty-five step-great-grandchildren, and 6 step-great-great-grandchildren. Visitations were held on Friday prior to time of funeral service at the Zion Lutheran Church in Ainsworth, Nebraska. Pastor Georg Williams officiated over the service. Music was provided by Betty Bower. Pallbearers were Nathan Rooney, Andrew Rooney, Alan Rooney, Max Fay, and Charles Johnson. Honorary bearers were, Andrew Johnson, Jeff Johnson, ChrisJohnson, Rusty Wrightsman, Dylan Nelson, Mike Heckman, and Scott Baugher. A Graveside service was then held on Saturday at 10:30 AM at the Glenvil Cemetery in Glenvil, Nebraska.

Arnold Krull passed away at the Ainsworth Care Center at Ainsworth, Nebraska on June 30, 2013. He had turned 100 years old in February. He was born in Glenvil, Nebraska to Otto and Lena (Uden) Krull. Arnold was the oldest of 3 children. He grew... View Obituary & Service Information

The family of Mr. Arnold J. Krull created this Life Tributes page to make it easy to share your memories.

Arnold Krull passed away at the Ainsworth Care Center at Ainsworth,...