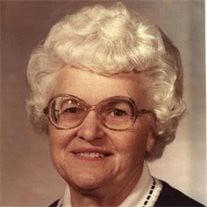 Irma Daisy (Painter) Docken was born on January 9, 1921 at Millboro, South Dakota to Ernest and Inez (Kirkpatrick) and passed away on July 8, 2014 at the Holy Family Hospital in Spokane, Washington. Irma attended grade school at rural schools in Tripp County, South Dakota. She was baptized and joined the Millboro Congregational Church along with her sister, Netha, and parents, Ernest and Inez Painter on May 8, 1938. Irma received a 2 year teaching certificate from Southern State Normal School at Springfield, South Dakota. She taught 7 years in rural schools in South Dakota and one year in 2nd Grade in Winner, South Dakota. She received a degree from Wayne State College at Wayne, Nebraska in 1965. She taught in Bassett Grade School from 1956 to 1986, 30 years as a 4th grade teacher, and later as the librarian, the last 7 years. Irma married Doyle A. Docken on June 3, 1946 at the Congregational Church in Millboro, South Dakota. Three daughters were born to Irma and Doyle; Coleen, Sandra, and Connie. Irma was a member of the Bassett United Methodist Church, the Nite Owls Club, and the Bassett United Methodist Women. Irma is preceded in death by her parents, husband, 4 brothers, 8 sisters, and 1 son-in-law. She is the last of 13 kids. She is survived by her 3 daughters, Coleen Prehm of Steetman, Texas, Sandra Masters of Lincoln, Nebraska, and Connie Bennett of Spokane, Washington. 6-grandchildren, 9-great-grandchildren, 2-step grandchildren, 15-step great-grandchildren,. Memorial services will be held on Saturday, August 23, 2014 at the United Methodist Church in Bassett with Pastor Rod Heilbrun officiating the service. JoAnn Swanson will be providing the music with special congregational selections of "Amazing Grace" and "Just A Closer Walk being sung. Honorary bearers will be all of Irma's fellow teachers and students. Inurnment will be held in the Bassett Memorial Park Cemetery under the direction of Hoch Funeral Homes of Bassett. Memorials were directed to the Bassett United Methodist Church or to the Rock County Senior Center in Irma's name.

The family of Mrs. Irma Daisy (Painter) Docken created this Life Tributes page to make it easy to share your memories.