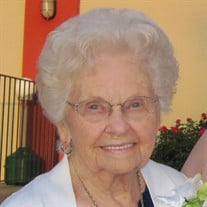 Irene M. Schelm died on May 5, 2020 at the age of 99, knowing, as one of her favorite hymns states; ”I’m but a stranger here, heaven is my home.” She was born on February 17, 1921 to Fred and Eda (Hermsmeyer) Rauscher in the family home near Johnstown NE. She attended Grand Prairie District 8 and graduated from Johnstown High School in 1938. Irene married Harold C. Schelm on June 15, 1941, and had 3 children Larry, Stanley and Janet. They lived and farmed near Ainsworth their whole lives. She was not just a housewife but a true farm wife - feeding livestock, working the hayfields, along with keeping the family lovingly fed and nurtured. Irene’s main priorities in her life were her faith and her family. She was baptized and confirmed in the Zion Lutheran Church and remained a member her whole life. She contributed to the church in any way that was needed- from folding bulletins, teaching Sunday school and attending Bible studies to serving in Dorcas and Lutheran Women’s Missionary League positions. Her faith was the guiding force in her life, offering direction and comfort in any situation. Her children, grandchildren, and great-grands brought her boundless joy and pride. She loved having the entire family over on Sunday afternoons making homemade ice cream, and she excelled at creating animal shaped pancakes for her grandchildren. She will be fondly remembered. Irene was preceded in death by her husband Harold, parents, 3 sisters (Edna, Helen, and Louise), and sons Larry and Stan. She is survived by her daughter Jan Vogelsang (Brian), daughters-in-law Sandy Schelm and Rebecca Schelm, seven grandchildren, and seventeen great-grandchildren. A private, graveside service was held at the Lutheran Cemetery near Ainsworth on Thursday, (May 7, 2020), officiated by Pastor Georg Williams. The song, "Savior, Again to Thy Dear Name We Raise" was played. Memorials have been suggested to the Zion Lutheran Church in her name. Hoch Funeral Home of Ainsworth was in charge of arrangements.

The family of Irene M. (Rauscher) Schelm created this Life Tributes page to make it easy to share your memories.