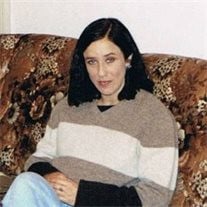 Ida L. "Leah" Fredericksen was born February 7, 1966 in Rupert, Idaho to Donald and Joan [Koch] Fredericksen. She left us on February 1, 2018 at her home south of Ainsworth, Nebraska. Her family moved to Talent, Oregon in 1970, where she lived until 2013. Then she moved to Long Pine, Nebraska to help with her parents. She was married and had two children Jori and Drai, who she loved more than anything. Ida enjoyed flowers and animals of any type. Ida is survived by her children, daughter Jori Beveridge and son Drai Beveridge both of Ashland, Oregon; her parents Don and Joan Fredericksen of Long Pine; special friend Mark Arens of Ainsworth; her sisters April Hinrichs and husband, Corvin of Ainsworth, and Sally Hanson of Long Pine, her brothers Gary Hoffman and wife Sharon of Catoosa, Oklahoma, Willy Hoffman of Long Pine, Mike Griffin and wife, Laura of Helena, Montana, John Hoffman of Cheyenne, Wyoming, Kevin Hoffman and wife, Cheryl of Eagle Point, Oregon; along with nieces, nephews and other family members. Funeral Services were held on Tuesday, February 6, 2018 at the Assembly of God Church in Ainsworth with Pastor Gary Graesser officiating. Music was provided by Myra Williams with the congregation singing "Just A Closer Walk With Thee." The CD Selections of "Dust In The Wind" by Kansas, and "When I'm Gone" by 3 Doors Down were played. Casketbearers were, Kai Atkinson, Kade Gracey, Roger Magary, Roy Snaza, Mike Rowley and Brent Deibler. Memorials were suggested to the family in Ida's name for a future designation. Burial was in the Grandview Cemetery at Long Pine under the direction of the Hoch Funeral Home of Ainsworth.

Ida L. "Leah" Fredericksen was born February 7, 1966 in Rupert, Idaho to Donald and Joan [Koch] Fredericksen. She left us on February 1, 2018 at her home south of Ainsworth, Nebraska. Her family moved to Talent, Oregon in 1970, where she lived... View Obituary & Service Information

The family of Ms Ida L. "Leah" Fredericksen created this Life Tributes page to make it easy to share your memories.