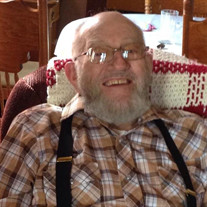 Henry “Heinie” William Rudnick was born on a farm south of Tilden, Nebraska on November 14, 1932 to William and Remine (Budde) Rudnick. He was baptized at Buffalo Creek Lutheran Church with the name Heinrich Wilhelm, (hence the nickname “Heinie”) In March of 1933, the Rudnick family moved to a farm 16 miles northeast of Ainsworth, Nebraska. Heinie attended School District 31 and graduated from Ainsworth High School with the class of 1950. He attended one year of college at Norfolk Jr. College. On May 7, 1961, he was united in marriage to Lois Joan Roblyer. To this union three children were born; Chris, Tom and Betty. Heinie was an ASC Commodity Inspector for many years. He served on the Brown County ASC Committee, Rural Brown County Fire Board, and was secretary of School District 17 for many years. The fall of 1997, Joan and Heinie were honored with the Middle Niobrara NRD Conservation Award. They operated a Grade A Dairy operation. Heinie was an avid woodworker, and received much pleasure going to craft fairs and wood carving competitions with Joan and selling their wares. He was a member of the Zion Lutheran Church of Ainsworth, where he served in many offices. He was a Sunday School teacher, a Bible class leader, and sang in the Senior Choir. Heinie is preceded in death by his parents, William and Remine Rudnick; a sister, Mildred Huelle; and two brothers, Bruno Rudnick and Ted Rudnick. He is survived by his wife, Lois Joan Rudnick; three children, Chris Rudnick of Colorado Springs, Colorado, Tom Rudnick (Kara) of Fort Collins, Colorado, and Betty Bower (Tom) of Ainsworth; five grandchildren, Hallie Bower, Nora Rudnick, Augusta Rudnick, Willa Rudnick and Alexander Rudnick and a sister –in-law, Joyce Scott of Arvada, Colorado, along with numerous nieces and nephews. Memorial Services were held on November 10, 2018 at the Zion Lutheran Church in Ainsworth, with Pastor Georg Williams officiating at the service. Music was provided by Georgia Williams with the congregation singing, “God Loved The World,” “Beautiful Savior” and “I’m But A Stranger Here.” Inurnment followed in the Ainsworth Cemetery. Hoch Funeral Home of Ainsworth was in charge of the arrangement. In lieu of flowers/memorials were suggested to the Zion Lutheran Church. To leave an online condolence visit www.hochfuneralhome.com

Henry &#8220;Heinie&#8221; William Rudnick was born on a farm south of Tilden, Nebraska on November 14, 1932 to William and Remine (Budde) Rudnick. He was baptized at Buffalo Creek Lutheran Church with the name Heinrich Wilhelm, (hence the nickname... View Obituary & Service Information

The family of Mr. Henry W. "Heinie" Rudnick created this Life Tributes page to make it easy to share your memories.

Henry “Heinie” William Rudnick was born on a farm south of Tilden,...