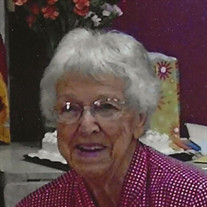 Helen Louise Townsend went to her home in Heaven on February 11, 2022 at the Rock County Hospital Long Term Care in Bassett. She had been residing there since October of 2020. Helen was born September 11, 1925, at Grandma Cooper’s home in Albion, Nebraska with the help of a midwife. Her parents were Guy and Elta (Cooper) Simons. Her siblings were: Tressa, Tom, Phyllis, John, Guy Jr., Twila and JoAnn. The family made their home at the Earl Peterson ranch on the northwest corner of Pony Lake. Helen attended Pony Lake School through eighth grade. The summer after eighth grade graduation, she developed Rheumatic Fever. After she was recovered, her mother was not well and she had to stay at home and care for her and help with the younger siblings. She later completed high school classes through correspondence and received her high school diploma. She also took eight college classes from Northeast Community College in Norfolk, Nebraska and 30 courses by correspondence from Emmaus Bible College and Stonecroft Bible. Helen moved into Bassett from the ranch when she was 20 and was working at the Blue Moon Café where she met her husband to be, Gordon Townsend. They married on September 18, 1947 at Stanton, Nebraska, and made their home in Bassett where they raised four children, Chuck, Laura, Bonnie and Tim. After marriage, Helen continued to work at Mim’s Café and the Kozy Café. She also worked as a Nurse Aide at the Rock County Hospital for 12 years before she retired to spend time volunteering, quilting, traveling, or going with Gordon to a favorite fishing spot, the horse races or to visit family and friends. As her children became involved with organizations and activities, she became involved as a leader of Junior Auxiliary, Brownie Scouts, Girl Scouts, Cub Scouts, and 4-H. Helen volunteered many hours of service as a member of the Rock County Historical Society and was President for seven years. She was also very active in the American Legion Auxiliary and was a member for 73 years holding an office for 66 of those years. Up until she was no longer able, she was involved with the Memorial Day services, either helping to put the American Flags on veteran’s graves, laying a wreath on the tomb of the Unknown Soldier for servicemen from all wars, or speaking at the service. You could also see her about town on Poppy Day, poppies and donation can in hand to support veterans. Her scrap books are full of clippings from magazines and newspapers about patriotic events. She taught her children by example to respect the American Flag. Helen loved dolls and hats and had an extensive collection of both. Whether it was taking hats for everyone to wear for a hat party at the Long-Term Care or sharing her antique dolls at the Rock County Museum during the fair, she enjoyed sharing her collections with others. She also had a library of books that grew from a love of reading. She read and shared many a fairy tale, bible story or a Little Golden Book with her grandkids and great grandkids. She especially loved having the grandkids and great grandkids come to visit or going to visit them and always had time to play with dolls or trucks, a game of Slap Jack or Go Fish, taking them on fishing trips and picnics, treasure hunts in the attic or a camping trip in the back yard. At family dinners you might find her at the “kid’s table.” Helen also enjoyed family reunions and over the years hosted many and always attended no matter where they were. Faith was an important part of her life. She attended Valley Grove Community Church for many years and the Emmanuel Community Church. She was active in the Ainsworth After 5 and the Mary Martha’s. After she moved to Long Term Care with the help of her good friend Pam Peterson, the aid of her walker and oxygen in tow, she continued to go out to church on Sundays until it got to be too painful to get in and out of her car. Her bible is well worn with many passages bookmarked, underlined, or highlighted. As her good friend Mary Schubert Hollopeter once wrote about Helen “Generosity, passion, patriotism, learning, sharing, faith.” – That was Helen. Helen was preceded in death by her husband, parents, son Chuck, sisters Tressa, Phyllis, and Twila, brothers Tom, John and Guy Jr., sisters-in-law Alta (Tom) Simons, Meda (John) Simons, Helen (Bob) Townsend, Charlotte (Wendall) Townsend, Judy (James) Townsend, Ioline Cleveland, brothers-in-law Wendall, James and Robert Townsend, Everett Cleveland, Warren Wulf, Ted Johnson, Ray Reicks, Delbert Fender, Harold Fender and Corky Greenough. She is survived by her children, Laura and Mike Lutz of North Platte, Nebraska, Bonnie and Steve Keim of Idaho Falls, Idaho, and Tim and Marilyn Townsend of Arlington, Texas, sister JoAnn Greenough of Lusk, Wyoming, sister-in-law Eunice Wulf of Ainsworth, Nebraska, nephew Kenny and Darlene Reicks of Hawthorn Woods, Illinois, eleven grandchildren, sixteen great-grandchildren, one great-great-granddaughter, and other nephews and nieces. A Memorial Service is being planned for Saturday, May 28, 2022 at the Emmanuel Community Church in Bassett with a Private Family Inurnment in the Bassett Memorial Park Cemetery. Memorials have been suggested to the Bassett American Legion Auxiliary or the Rock County Historical Society

Helen Louise Townsend went to her home in Heaven on February 11, 2022 at the Rock County Hospital Long Term Care in Bassett. She had been residing there since October of 2020. Helen was born September 11, 1925, at Grandma Cooper&#8217;s home... View Obituary & Service Information

The family of Helen L (Simons) Townsend created this Life Tributes page to make it easy to share your memories.

Helen Louise Townsend went to her home in Heaven on February...