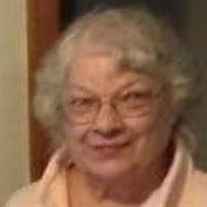 Helen E. (DeVall) Bartlett was born in Fremont, Nebraska to Edgar and Iona (Christ) DeVall on January 29, 1942. Helen passed away on April 3, 2020 at her home in Bassett, Nebraska. She was the fourth child of thirteen. Helen graduated from Rock County High School in 1959. She then met Victor Bartlett and married him on November 14, 1959 in Ainsworth, Nebraska. They had two daughters, Cindy and Lisa. They lived in Bassett for many years. Helen worked at the bakery and pharmacy in Ainsworth. She then was a stay-at-home mom until her children graduated. She then went back to work, this time washing dishes at the Range Café which she did for 23 years. Helen decided to try something different when she went to work at the Super 8 Motel in Ainsworth with her daughter, Lisa and granddaughter, Tara. There was never a dull moment with the three of them working together. Helen liked to play volleyball, card games and doing word searches. She also enjoyed going to yard sales and finding all of the great deals. As Helen came from a large family, she was a daughter, sister, mother, grandma and aunt, as well as, a good friend. She was preceded in death by her parents; husband, Victor; daughter, Cindy Koch; four sisters, Lora Hoffman, Marge Clausen, Dorthy DeVall, and JoAnn Copeland; and two brothers, Chuck DeVall and Tom DeVall. She leaves to mourn her passing, her daughter, Lisa and boyfriend, Danny Witt of Ainsworth; five grandchildren and eight great-grandchildren; three sisters, Bertha Shay of Milwaukie, Oregon, Linda DeVall of Ainsworth and Ione (Rick) Anderson of Bassett. She is also survived by three brothers, Ed (Lottie) DeVall of Ainsworth, Harold (Janice) DeVall of Bassett, Bob (Bonnie) DeVall of Stratton, Colorado; along with numerous nieces, nephews and other family members and friends. A Private Graveside Service was held on Monday, April 6, 2020 at the East Park Cemetery near Ainsworth with Pastor David Randall officiating at the service. The songs, “Forever and Ever, Amen” by Randy Travis & “ Dancing in the Sky“ by Dani and Lizzy were played. Casketbearers were: Danny Witt, Dustin Gaskins, Chris Jameson and Cameron Koch. In lieu of flowers, memorials have been suggested to the family in Helen's name for a future designation. Hoch Funeral Home of Ainsworth was in charge of the arrangements.

Helen E. (DeVall) Bartlett was born in Fremont, Nebraska to Edgar and Iona (Christ) DeVall on January 29, 1942. Helen passed away on April 3, 2020 at her home in Bassett, Nebraska. She was the fourth child of thirteen. Helen graduated from... View Obituary & Service Information

The family of Helen E. (DeVall) Bartlett created this Life Tributes page to make it easy to share your memories.