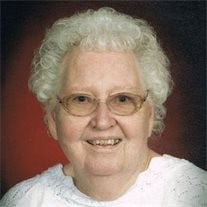 Hazel Virlue Tinkham was born on August 16, 1923 at Wood Lake, Nebraska, the only child of Lloyd and Jenny Mae (McNare) Tinkham. At the age of 3, she moved with her parents to a farm in the Beaver Valley area north of Hay Springs, Nebraska. Here she would grow to adulthood. A favorite childhood memory of Hazel's was playing softball on an all girls team, which was made up of girls from the Beaver Valley neighborhood. She graduated from Chadron High School with the class of 1941. She went on to attend Chadron State teachers college. Hazel returned with her parents to the Wood Lake and Johnstown area after college. She was teaching school south of Ainsworth, Nebraska, where she met her husband, Eugene Fry. They were married on June 1, 1949 at Ainsworth, Nebraska, where they made their home, until 1956 when they moved to Ontario, California. This marriage was blessed with six children, Lynda, Norman, Joyce, Alberta, Carol and Richard. Upon the retirement of Hazel's parents, the family moved home to the ranch south of Johnstown, where they lived until they sold the ranch and retired in 1974. Hazel was preceded in death by her parents, and husband Eugene, of 44 years. She is survived by her children, Lynda Conant and husband Kenneth of Omaha, Nebraska, Norman Fry of Claypool, Arizona, Joyce Schmidt and husband Arvin of Johnstown, Alberta Bennett of Aurora, Colorado, Carol King and husband Chris of Fort Collins, Colorado, and Richard Fry. Nine grandchildren and 17 great-grandchildren. Funeral services were held on March 15, 2013 at the Church of the Nazarene in Ainsworth, Nebraska. Pastor Howard Hays officiated over the service. Congregational selections of "The Old Rugged Cross" and "Amazing Grace" were provided by Kathy Bennett and Nancy Campbell. A special song selection of "I Can Only Imagine" was provided by Jody Schmidt. Pallbearers were Jody Schmidt, Sidney Schmidt, Ian Bennett, Logan King, T.J. King and Brock Hobbs. Honorary bearers were all of Hazel's other grandchildren and great-grandchildren. Interment was held at the Ainsworth Cemetery under the direction of Hoch Funeral Home. Memorials were suggested to the family in her name.

Hazel Virlue Tinkham was born on August 16, 1923 at Wood Lake, Nebraska, the only child of Lloyd and Jenny Mae (McNare) Tinkham. At the age of 3, she moved with her parents to a farm in the Beaver Valley area north of Hay Springs, Nebraska.... View Obituary & Service Information

The family of Hazel V. (Tinkham) Fry created this Life Tributes page to make it easy to share your memories.