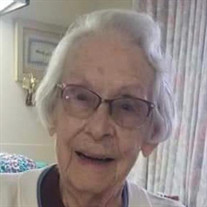 Hazel Bernice “Penny” Ohlrich was born at the Brown County Hospital in Ainsworth, Nebraska on January 30, 1930 to Frederick and Mamie (Hulshizer) Henne. Penny graduated from Ainsworth High School in 1948 and then attended Wayne State College. She spent most of her life helping others by working with the elderly, and also with handicapped adults and children. She was an avid volunteer in her community and especially enjoyed working in the Ainsworth Community Thrift Shop after her retirement. Penny had many hobbies which included being competitive with her brothers in archery, fishing and hunting. She also enjoyed going to coffee to visit with friends and family, square dancing, bingo and daily walks. After a brief stay in Rock County Long Term Care, she passed away surrounded by her loved ones in the Rock County Hospital in Bassett, Nebraska on November 7, 2019. Penny was preceded in death by her parents, Fred and Mamie; her brothers, Calvin Henne of Bridgeport, Nebraska, George Henne of Ainsworth, Gene Henne of Valentine, Nebraska, Larry Henne, Freddie Henne, and a sister, Thelma Powell all of Ainsworth. She is survived by her husband Marvin Ohlrich of Ainsworth; son, Mike Ohlrich of Ainsworth, Hazel Henne of Bridgeport (wife of Calvin); daughters, Cynthia Klinger and husband, Ken of Hulett, Wyoming, Lynn Borysenko & husband, Henry of Ainsworth and Bonnie Fisk and husband, Willie of Chadron, Nebraska, Diana Kilgore and husband, Don of North Carolina; along with three grandchildren, Cathy Christ and husband, Mike of Kearney, Nebraska, Travis Johnson of Valentine, and Bowde Johnson of Kearney. Penny is also survived by seven great-grandchildren, Wesley, Brady, Korbyn, Kade, Paden, Keslea & Eden; along with numerous nieces and nephews. A Memorial Visitation was be held on Tuesday, November 12, 2019 at the Hoch Funeral Home in Ainsworth. A private family internment will occur in the East Park Cemetery at Ainsworth at a later date. In lieu of flowers, memorials may be made to the family for future designation. Please leave an online condolence at www.hochfuneralhome.com.

Hazel Bernice &#8220;Penny&#8221; Ohlrich was born at the Brown County Hospital in Ainsworth, Nebraska on January 30, 1930 to Frederick and Mamie (Hulshizer) Henne. Penny graduated from Ainsworth High School in 1948 and then attended... View Obituary & Service Information

The family of Mrs. Hazel B "Penny" (Henne) Ohlrich created this Life Tributes page to make it easy to share your memories.