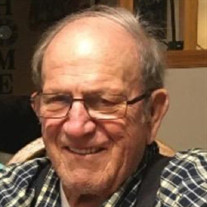 Harry Eugene Swanson was born on Nov. 9, 1933, the second child of Elmer and Helen (Everingham) Swanson. He attended District #51 for grade school excluding his sixth grade when he attended the Rose School. He graduated from Rock County High School in 1951. After graduation he started his mechanic career in Bassett, Nebraska working at the Allis Chalmers dealership, Rock County Implement and then the Ford Garage, until being drafted into the Army in 1955. Harry served at Fort Polk, Louisiana in the armored infantry as a mechanic. He was honorably discharged in 1957. On his return he again worked for the Ford Garage before joining his brothers in a partnership at Sandhill Implement in 1961. When Sandhill Implement dissolved in 1989, he went into partnership with Lester Sybrant of Northern Plains and brother Dave. Upon retirement of Lester, Lester sold to George Murdock. Harry continued his mechanic skills until retiring from the business in 2009. In 1961 he married Karen Lanz Strand, daughter of Ernest and Margaret Lanz. Karen passed away in 1966 from leukemia. Harry adopted her son Jeffrey Todd. One of Harry's hobbies was stock car racing, which he did from 1953 until 1973. He had a reputation from being a top contender in the local racing circuit. Harry was a 40 plus year member of the Bassett American Legion #123, and also of the Elks #1790 of Ainsworth. In 1980 Harry purchased land on Bone Creek in Brown County and built his home there. He "farmed", gardened, had an apple orchard, and tinkered with his collection of Ford tractors and mechanical "toys". He also enjoyed going to auctions to add to his collections. Another one of his enjoyments was hunting elk in Montana and Colorado and the annual fall deer hunts in Arthur County. After his retirement, most days he returned to Northern Plains to "work" and to get in a couple of card games. He would often go with his brother, Duane, to what they call their "Pheasant Farm" to help with fencing, planting trees, and other activities. He made several trips across the country side with Dave to “look at engines”. Harry enjoyed the company of his dog, cats, and the livestock at his place. Harry passed away August 15, 2020 at the Long Term Care in Bassett after a short stay. Preceding him in death were his wife Karen of five years, his parents Elmer & Helen Swanson, a brother-in-law Karl Menzel, a nephew Brian Swanson and a niece Sally Stewart. Survivors include: son Jeff (Jo) Swanson of Bassett, grandchildren Amber (Josh) Chamberlain and Amanda (Brent) Cemer all of Elkhorn, Nebraska, Chad (Connie) Butler of Cassville, Missouri, Kris (Kevin) Pickhinke of Bassett; great-grandchildren, Kadyn Swanson, Evan and Elizabeth Butler, Kastin and Karley Pickhinke, Addisyn Cemer, Alexa and Emmalin Chamberlain. Brothers: Duane (Patti) Swanson of Bassett, Ken (Greta) Swanson of Central City, Nebraska, Dave (JoAnn) Swanson of Bassett; sister Joyce Menzel of Bassett along with nieces and nephews. Harr The family suggested memorials to Bassett American Legion Post #123, the Rock County Senior Center or to the Stuart Raceway in Harry's name. Casual attire was requested by the family for those who attended.

Harry Eugene Swanson was born on Nov. 9, 1933, the second child of Elmer and Helen (Everingham) Swanson. He attended District #51 for grade school excluding his sixth grade when he attended the Rose School. He graduated from Rock County... View Obituary & Service Information

The family of Harry E. Swanson created this Life Tributes page to make it easy to share your memories.