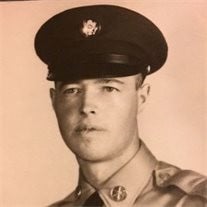 Harry Victor Pedersen, 76, of Bassett, Nebraska, passed away on March 21, 2018 at the Grand Island VA Medical Center in Grand Island, Nebraska. Harry was born to Victor and Marjorie (Skillman) Pedersen at Ainsworth, Nebraska on August 4, 1941. He attended country school and then graduated from Ainsworth High School in 1961. He was enlisted in the United States Army from the years of 1964-1966 and then was in the United States Army Reserve until 1969. While he was enlisted he received certifications in Wheel Vehicle Mechanics and Track Vehicle Maintenance. Also was trained in Organizational Maintenance and Operation of Howitzer 8" S.P.M-100. Harry married Barbara Appleman on December 28, 1971, at her parent's home. After he married Barb, he received certifications as a John Deere mechanic. He took his passion for tools and tractors and picked a career in agriculture and farming until he retired in 1996 due to health issues. After retirement Barb and he spent their time with family and friends. Harry is preceded in death by his wife, Barb, parents, and parents-in-law, his sister, Ella Mae (Pedersen) Shelton and his Uncle Don Skillman. He is survived by his niece, Angela Hempel and Mike of Long Pine, Nebraska, Aunt Phyllis Skillman of Ainsworth; two brothers-in-law and their wives, Robert (Wilma) Appleman and John (Verna) Appleman all of Johnstown, Nebraska; two sisters-in-law and their husband's, Wanda (Wayne) Major of Riverton, Wyoming and Linda (Tom) Black of West Point, Nebraska; and many nieces and nephews. Memorial Graveside service were held on April 7, 2018 at the Ainsworth Cemetery. Stanley Morrison and LeRoy Sandford officiated the service. The song "Where All Is Peaceful" was sung at the cemetery. Military Honors were provided by the Ainsworth American Legion Post #79. Hoch Funeral Home of Ainsworth assisted with the arrangements.

The family of Mr. Harry Victor Pedersen created this Life Tributes page to make it easy to share your memories.