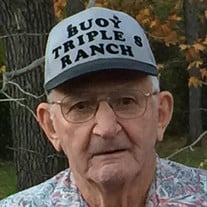 Harry Kenneth Buoy was born June 14, 1928 in the home of his parents, John H. and Phyllis (Geist) Buoy at the Buoy homestead in southeastern Rock County (Gracy Precinct) with a Butka address. He passed away January 12, 2020 at the age of 91 at the Rock County Hospital in Bassett, Nebraska. Harry, along with older brothers Roy, Floyd, and Mervin and younger brothers Eldon, Jack, and Dewayne spent their childhood years on the family ranch. Harry attended 1st – 8th grade at the Butka School. He graduated from Rock County High School in 1946. As a freshman he lived in Bassett with his older brother Floyd. His sophomore and junior years he lived with the Bill Kelly family where he worked for them with their dairy, first north of Bassett then later south of town. Harry recalled milking cows and delivering milk to customers each day before school began. Harry also shared the memory of living with the Kelly’s south of Bassett when family came to pick him up, advising his brother Mervin was killed in action in Italy – WW II. Harry’s senior year, he and brother Eldon batched in a cabin. During this time, he did gardening for Pop Reynolds (barber/gardener) earning 20 cents an hour. Harry shared he was interested in school activities and sports but had to work to be able to stay in high school. After high school, Harry worked for the sale barn loading cattle on the train and later for the Morton Brothers Ranch. In the fall of 1948, Harry and brother Eldon headed to Idaho to work for a saw mill (where his Uncle Clifford Geist worked). Harry told how he “shoved boards off a table” and getting the scraps to a fire pit. He and Eldon batched in a little cabin while there, returning back to Rock County just before Christmas. Harry returned to working for the Morton ranch which also started his self-taught electrician skills as he wired buildings for the coming of electric power. Harry enjoyed electrician work and in later years did electrician work for friends and family. He received a Journeyman’s License from the State of Nebraska when the law was passed requiring an electrician to be licensed. Another special skill of Harry’s was being an excellent welder, doing all of his own repairs, designing and building things for the ranch. He was once approached to start a welding shop. He did do welding and repair from his own shop, primarily working outside a small area housing his tools and welders. December 29, 1950, Harry married Faye L. Blake. On December 29, 2019, as Harry and Faye celebrated their 69th anniversary, he shared he worked until noon, quit his job, went to the courthouse in Ainsworth where they were married and five days later was on the train leaving Bassett for his enlistment in the Army. Harry did basic training at Ft. Riley Kansas. Harry happened to be home on leave shortly after Leanne was born. Brother Floyd then took him to St. Paul to catch a train west bound to resume Army duties. He loaded onto a ship at Seattle then to San Diego before the 21 day trip going to Japan and then on to Korea to serve in the Korean War. After serving our country, Harry was discharged in December 1952 and returned home to Rock County. He, Faye and Leanne moved to the Buoy homestead where he purchased some cows from Eldon and Jack who had been ranching part-time for his folks. Harry had a few stock cows but most income came from milking cows, separating the milk, selling the cream to buy groceries (usually at the Rose Trading Post) and feeding the milk to bucket calves purchased on trips to Wisconsin dairies. Harry would only buy black bull calves and nothing with Holstein features. Harry, also during this time, was one of the first in Rock County to be schooled in artificial insemination. Harry used select Angus bulls, bred the Holstein cows, and saved pure black heifers with Angus features for replacements and building his cow/calf operation. Harry would say “they look like Angus but give milk like a Holstein.” Harry was proud of the herd and developing a few acres of irrigated corn for feed. The years of hard work led to Harry and Faye purchasing the homestead from his parents in 1969. He took a lot of pride in the ranch being in the Buoy family over 100 years and him becoming the second owner of the homestead. Harry was preceded in death by his parents; brothers Floyd, Roy, Mervin, Eldon, Jack and Dewayne; sisters-in-law Neva Buoy, Kathy Buoy, Jewell Buoy, Margaret Buoy; parents-in-law Edward and Gladys Blake; brothers-in-law Erwin Blake, Wallace Blake, Iven Blake, Clyde Blake, and Archie Blake. Harry is survived by his wife, Faye; his six children Leanne (Doug) Fox of Bassett, Gary (Daunitta) Buoy of Burwell, Bonnie (Brad) Emerson of Bassett, Lonnie (Deb) Buoy of Bassett, Jerry Buoy of Laurel, and Cindy (Todd) Norton of Ainsworth; 18 grandchildren, 44 great grandchildren, and one great great grandson; sisters-in-law Sylva Buoy, Burwell, Elva Buoy, Long Pine, Darline Blake, Bassett, Ila Mae Blake, Bassett and many nieces and nephews. Funeral Services were held on Saturday, January 18, 2020 at St. Peter Lutheran in Bassett with Vicar Nancy Moore and Pastor Stan Gurney officiating at the service. Special Music was provided by Mike Baxter singing the selections, “I’ll Fly Away,” “The Old Rugged Cross,” and “Shall We Gather At The River.” Casketbearers were: Shane Fox, Marty Buoy, Tyler Buoy, Shaun Emerson, Ryan Buoy, Casey Norton and Dustin Nachtman. Honorary Casketbearers were: All of Harry’s Other Grandchildren and Great-Grandchildren. Memorials were suggested to the Rose Community Hall, the Gracy Fire District or to the donor’s choice. Interment was in the Rose Hill Cemetery near Rose under the direction of the Hoch Funeral Home of Bassett. Military Honors were conducted by Bassett American Legion Post #123 with the assistance from military members of Harry's family. Online condolences may be left for the family at www.hochfuneralhome.com.

Harry Kenneth Buoy was born June 14, 1928 in the home of his parents, John H. and Phyllis (Geist) Buoy at the Buoy homestead in southeastern Rock County (Gracy Precinct) with a Butka address. He passed away January 12, 2020 at the age... View Obituary & Service Information

The family of Harry K. Buoy created this Life Tributes page to make it easy to share your memories.