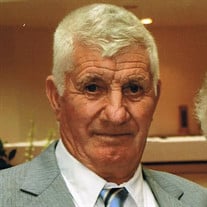 Harold Glenn Prentice, 90, formerly of Springview, Nebraska passed away on Saturday, August 31, 2019 at the Norfolk Veteran’s Home in Norfolk, Nebraska. Harold was born on January 4, 1929 to Rosa (Nanna Rose Todd) Prentice and Will McCannom Prentice of Cherry County, Nebraska north of Mullen, Nebraska. Harold was the first of five children. He was 11 years old when they moved north of Johnstown, Nebraska. The family moved to the Hulbert place in Brown County in 1940, then to Meadville in 1942. In 1944, they moved to Keya Paha County on the Hienemen place. Harold graduated from Keya Paha County High School in 1947. He taught school at Guide Rock School in 1948. The family moved to the George “Wash” Dillon homestead, west of Springview in 1950. In 1951, Harold went into the Army where he spent time in Alaska until the time of his discharge in June of 1953. He met Josephine Carr and they were married on April 25, 1954 at Springview, Nebraska. They lived on the “home place” where they raised four daughters; Vicki, Janeen, Lori, and Gina. Harold was a farmer, rancher, mechanic, and tinker. In 1975, Harold moved the family off the farm and into Springview. Harold was active in the American Legion, the Eastern Star, the Shriners, and the Alumni. He also worked as a Hail Crop Insurance Adjuster. Harold and Josephine loved going to dances, playing cards, and having coffee with friends and family. Harold had developed Alzheimers Disease, and moved to the Norfolk Veterans' Home in December of 2012. He is preceded in death by his parents, Will and Rosa Prentice; his wife Josephine, of 64 years; two brothers, Edward and Danny Prentice; daughter Vicki; and brother-in-law, Leslie Evert along with Josephine’s sisters and their husbands, Elayne (John) Costello, Ethelda (Marvin) Blake, Pauline (Gail) Lehn, Betty Kerr, and Daphyne (Bill) Clark. Harold is survived by his three daughters, Janeen Prentice of Madison, Nebraska, Lori (Neil) Connot of Yankton, South Dakota, and Gina (Bud) Knight of Wright, Wyoming, and son-in-law, Jim Mundorf (Anna) of Kalispell, Montana; ten grandchildren, 26 great-grandchildren, and four great-great-grandchildren; two sisters, Annabelle, Evert of Gordon, Nebraska, and Dixie (Larry) Hespe of Springview; two sisters-in-law, Hazel Prentice of Gordon, and June Prentice of Cottonwood, Arizona; brother-in-law, Garth “Buck” (Doris) Carr of Springview; along with nieces, nephews, and other family members. Funeral Services were held at the United Methodist Church in Springview, Nebraska. Pastor Jenice Epp officiated the service. Music was provided by Rick Nelson. Congregational Hymns were, “Old Rugged Cross” and “On Eagle’s Wings.” Casket bearers were, Chris Mundorf, Jeff Mundorf, B. J. Knight, Dusty Knight, Ryan Knight, Monte Connot, and Glenn Connot. Honorary bearers were Tanelle Petersen, Josie Shrader, and Becca Sickles. Organizational Rites were given by the Bethany Chapter #113 Order of Eastern Star. Military Honors were provided by the Springview American Legion Post #98. Hoch Funeral Home of Ainsworth was in charge of the arrangements. In lieu of flowers, memorials were suggested to the family for a future designation. In lieu of flowers, memorials are suggested to the family for a future designation.

The family of Mr. Harold G. Prentice created this Life Tributes page to make it easy to share your memories.