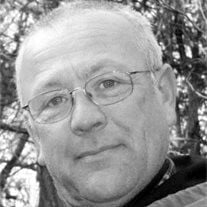 James Henry Fuhrman was born on May 8, 1952 in Gregory, South Dakota to Henry and Francis Fuhrman and passed away on July 27, 2016. His childhood years were spent in Burke, South Dakota. He grew up with his siblings, Gary, Rita, David, and Ray Dean. Jim married his beloved wife Eugenia (Jean) Fuhrman, on December 6th, 1968. To this union three children were born, Leslie, James, and Keith. After high school, Jim worked for his parents on their farm for seven years. From there he became a ranch hand for multiple different ranchers. In October 1976, Jean and Jim moved to Bassett, Nebraska, where Jim worked as a trucker, mechanic, farmer, and eventually owning and operating his own trucking business. In his leisure he enjoyed gardening, making jelly, (the road trips it took to get the fruit to make the jelly) wood working, baking, attending any of his grandkids sports events, and playing cards. As a note, mom and dad have played over 500 games of Sandhills Rummy this year and after a long tally, dad is STILL up by three hands. Jim leaves to mourn his wife Jean, their son Keith and wife Jill of Omaha, Nebraska. Grandchildren, Sydney, Riley, and Carson of Omaha, Donald Mayville and fiancé, Carrington Hammons, of Grovetown, Georgia. Siblings, Gary and Sharon Fuhrman of Buffalo, Minnesota, David and Rita Kaupp of Gregory, David and Ellen Fuhrman of Marion, South Dakota, Ray Dean Fuhrman of Wisconsin, and many aunts, uncles, nieces, nephews and cousins. Waiting for him in heaven are his daughter Leslie, son James, and his parents and other family members. A Celebration of Life Event was held at the Bassett Legion Club on Friday, August 5, 2016 from 11:00 AM to 3:00 PM. Jim Arnholt led in a time of sharing along with other family members sharing as well. Jim's wishes were to be cremated with no formal services. In lieu of flowers memorials were suggested to the family in his name for a future designation. Hoch Funeral Home assisted with the arrangements.

James Henry Fuhrman was born on May 8, 1952 in Gregory, South Dakota to Henry and Francis Fuhrman and passed away on July 27, 2016. His childhood years were spent in Burke, South Dakota. He grew up with his siblings, Gary, Rita, David, and Ray... View Obituary & Service Information

The family of Mr. James H. "Jim" Fuhrman created this Life Tributes page to make it easy to share your memories.