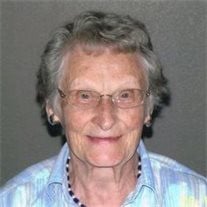 Gwen Genelle Baker was born on June 11, 1917 at North Platte, Nebraska to Bertha Elizabeth (Smith) Baker and John David Baker. She died December 10, 2016 at the age of 99 years, 6 months. When Gwen was a year old, she traveled with her parents to Burton, Nebraska where she spent her childhood on the Baker ranch. All eight of the Baker children attended school in Burton through grade 10 and then attended Springview High School. Gwen graduated from Springview High School in 1935, completing the normal school course of study. She was hired to teach the Woods District in 1935-1936, the Libolt district from 1936-1939 and the Mock district in 1939-1940. She attended Wayne State College the year of 1940-41 in order to obtain a regular teaching license. She was hired by the Ainsworth City Schools to teach fourth grade from 1941-1945. Those years were impacted by the air base and in 1941 Gwen had 51 students in her classroom. Gwen was known as an excellent teacher. Gwen met her future husband while teaching in Ainsworth and singing in the church choir. She married Glen Fling on December 3, 1945 after he returned from his tour of duty in Europe. They lived on the Fling Farm east of Ainsworth for 27 years before they moved into Ainsworth where Gwen continued to live until six months before her death. Gwen was active in the community as a member of many organizations. She was especially proud of her long-time association with the Rim of the Prairie Extension Club. She was a charter member in 1945, received her 50-year pin and continued until the club disbanded in 1988. She served as an officer in every capacity. Other activities included the Brown County Education Association, the Retired Teachers Association, the Ainsworth Garden Club, TOPS, Young Matrons and the Brown County Historical Association. Gwen contributed to the community for many years through her work at the Thrift Shop. Gwen joined the Methodist Church in 1944 and served in a number of different capacities including United Methodist Women, chair of the funeral dinner committee for many years, a circle member and leader, and lay representative at annual conference. Gwen was at her best as teacher of the first and second grade Sunday school for more than a decade. When the Methodist Church celebrated its centennial in 1987, Gwen and Glen were interviewed by Everett Copes and he wrote, "It would be difficult to find any church board, committee or appointment that Glen or Gwen hasn't willingly served on. To visit with them about their church becomes a revelation of faith and history. No one can tell it better or with more devotion." Gwen loved to garden and was recognized for her "green thumb." She always had a big garden in the country and kept a small garden in town where she enjoyed flowers and vegetables. Gwen was a fine seamstress and excelled at crochet and embroidery and other arts and crafts. She made the world's best cinnamon rolls and sugar cookies. Gwen is remembered as a generous and kind woman who always extended a welcoming and helping hand to neighbors, friends and relatives. She saved articles about births, deaths, marriages, engagements and school accomplishments. Gwen loved her family and followed the activities of her children, grandchildren and great-grandchildren with great interest. Thinking of others was a way of life for her. Gwen was preceded in death by her husband Glen in 1998, her parents and five siblings. Left to cherish her memory are her three children and their spouses: Mary and Pisal Chandrasurin, Carol and Dale Lauritzen, Donald and Barbara Fling; six grandchildren: Akom Chandrasurin, Nicolas (Carrie) Chandrasurin, Nathan (Samantha) Abbott, Zachary (Lauren) Lauritzen, Jerod (Stephanie) Fling, and Erin (Kurt) Hammond; 12 great-grandchildren; brother Vance (Marilyn) Baker, brother Brad Baker, sister-in-law Phyllis Baker, many nieces and nephews, and wonderful friends. Funeral services were held at the United Methodist Church in Ainsworth with Pastor David Randall officiated at the service. Music was provided by Sherry Campbell as well as instrumental selections being performed by Sydney Fling on the flute and Zachary Lauritzen on the piano. Pallbearers are Jerod Fling, Nathan Abbott, Zachary Lauritzen, Nicolas Chandrasurin, Kurt Hammond and Cole McCall. Honorary Bearers were: All of Gwen's other family and friends. Burial followed at the East Park Cemetery near Ainsworth. In lieu of flowers, memorials were suggested to the Brown County Foundation Teacher's Scholarship Fund. Hoch Funeral Home of Ainsworth entrusted with the funeral arrangements.

Gwen Genelle Baker was born on June 11, 1917 at North Platte, Nebraska to Bertha Elizabeth (Smith) Baker and John David Baker. She died December 10, 2016 at the age of 99 years, 6 months. When Gwen was a year old, she traveled with her parents... View Obituary & Service Information

The family of Gwen G. (Baker) Fling created this Life Tributes page to make it easy to share your memories.