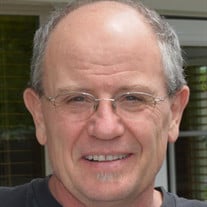 Gregory Jerome Lohmeyer was born on October 4, 1957 in Texas City, Texas to Cecil K. and Frances C. (Mattingly) Lohmeyer. He was the middle sibling to John, Tom, Julie, and Kevin. At three, his family moved to the Denver area, where their house was the place to be for neighborhood kids. Gregg was always active and enjoyed camping and skiing and could be found jumping on the trampoline or into the pool or even from the trampoline into the pool. During his second semester of high school, his parents and younger siblings moved to Illinois, and Gregg stayed in Colorado to finish school. After graduation, he worked various jobs before moving to Alliance, Nebraska to work on the railroad with his brother John. It was in college in Scottsbluff, Nebraska where he met Debra Davison. The two attended college in Missoula, Montana for 3 years and married on September 15, 1984. After finishing college that same year, the couple moved to Portland, Oregon, where Gregg took a job first as a traveling photographer and later as quality control in a flour mill. In 1989, their first child, Kenneth, was born. In 1993, the family moved back to Long Pine, Nebraska, where Gregg had a photography business and Deb opened her chiropractic clinic. Isabella was born in 1995 and Francesca followed in 1999. In 2009, the couple moved to Ainsworth and remodeled their current home. Gregg began working for H & R and worked there until his death. Gregg had an affinity for photography and art, skiing, and learning new things. He was Google before there was Google and could always fill in the rest of the details on most subjects. He was a unique person, but always found a way to engage with others and meet them at their interests. He loved a good conversation and was a great listener. Gregg was a loving and engaged father, taking the kids on trips to the Long Pine Creek or walking the railroad bridge. He was glad to see his three children grown and married and loved to be a grandpa to his three grandchildren, always picking up rocks for them and sending them little packages of random gifts. Gregg passed unexpectedly on February 12, 2021 from complications related to leukemia in Kearney, Nebraska. He is preceded in death by his parents. He is survived by his wife, Debra; his three children and their spouses, Kenneth and wife Anna of Denton, Texas; Isabella Lindholm and husband Rhett of Gothenburg, Nebraska; and Francesca Castillo and husband Moi of Kearney; mother-in-law, Karen Davidson of Ainsworth, Nebraska; brothers, John and Berta Lohmeyer of Denver, Colorado, Tom Lohmeyer of Ft. Collins, Colorado, and Kevin Lohmeyer of Davenport, Iowa; sister Julie Lohmeyer of Geneseo, Illinois; brothers-in-law Jacques Davison of Bradley, Arkansas, Jesse Colburn of Bradshaw, Nebraska, and Mark Colburn of Henderson, Nebraska; sister-in-law Denise Crofutt of Long Pine; and three grandchildren, Cora, Eve, and Ezra. Funeral Services were held on Tuesday, February 17, 2021 at the Hoch Funeral Home in Ainsworth. Pastor Tim Wyrick officiated at the service. Music was provided by Kayla Schrantz. The CD music selections played were “Abide With Me”, by GENTRI and “I Can Only Imagine”, by Mercy Me. Cremation was to follow the services. Memorials have been suggested to the family in Gregg’s name for future designation.

Gregory Jerome Lohmeyer was born on October 4, 1957 in Texas City, Texas to Cecil K. and Frances C. (Mattingly) Lohmeyer. He was the middle sibling to John, Tom, Julie, and Kevin. At three, his family moved to the Denver area, where their house... View Obituary & Service Information

The family of Mr. Gregory J. Lohmeyer created this Life Tributes page to make it easy to share your memories.