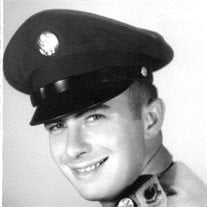 Cowboy, farmer, avid hunter, proud auctioneer, voracious reader, and former enthusiastic dancer who occasionally stayed on beat, Glenn A. Miller passed away peacefully Monday, July 25, 2016, at Tabitha Nursing Center, Crete, Nebraska. Glenn was born in Long Pine, Nebraska, grew up in his beloved Sandhills, and graduated from Rock County High School. After working as a cowboy in Wyoming, he joined the United States Army in 1962 and served for three years. After basic training, he was deployed to Panama and received intensive training as a cook where, as his children would joke, his cooking was regarded as a deadly weapon to the American troops. (Actually, he could cook quite well.) In Panama, he met Cristina Quiros. They married on September 20, 1963 at Fort Amador in the Canal Zone, returned to the States, and had three wonderfully perfect children, Julie, Jane, and Curtis. Glenn and his family lived and worked on several farms/ranches in the Nebraska Sandhills and in Minnesota before finally returning to the family farm south of Newport. After eventually selling the farm, Glenn also worked as a guard at the Nebraska State Penitentiary and even became an auctioneer. Upon his retirement, Glenn moved to Iowa where he became very involved in Catholic Church activities and especially church fundraising auctions. Glenn was especially proud when he became a Third Degree Knight with the Knights of Columbus. He was also a member of the Oltman-Messman Post 294 (Hallam, Nebraska) American Legion. Glenn was preceded in death by his parents, Arthur and Lena (Frizzell) Miller, and a baby brother. He is survived by his three children, Julie (Bill) Kerns and Jane Miller all of Crete, and Curtis Miller of Rockmart, Georgia; two grandsons, William Kerns of Wilber, Nebraska and Michael Kerns of Omaha, Nebraska; a sister Betty Hamsa of Dwight, Nebraska and a brother Melvin Miller of Lucas, Iowa. Although they eventually divorced, he and Cristina remained close until his death. The marriage also resulted in a close family and two especially cherished grandsons. Glenn's greatest loves were hunting and fishing, and living life on his own terms. Now, after several years battling illness, he is free to be the cowboy he always was and again roam peaceful sun-filled skies. Funeral Service with a Rosary Prayer service was held, at the Holy Cross Catholic Church in Bassett, Nebraska. Father Phil Flott served as the Celebrant for the service. Music was provided by Ann Shaw. Pallbearers were Dan Hamsa, Pat Soltys, Jim Frizzell, Dean Sidak, Dave Sidak, and Dale Sidak. Honorary bearers were all of Glenn's other family and friends. Burial with Military Honors being presented by the Bassett American Legion Post #123 followed at the Bassett Memorial Park Cemetery. In lieu of flowers memorials were suggested to the family for a future designation. Hoch Funeral Home of Bassett was in charge of the arrangements.

The family of Mr. Glenn A. Miller created this Life Tributes page to make it easy to share your memories.