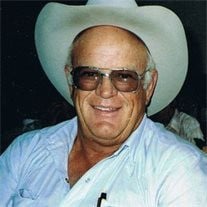 Glenn Louis Kienke was born May 9, 1935, to Louis F. and Fern L. (Jackson) Kienke at home in Burton, Nebraska and departed this life on April 17, 2015 at Good Samaritan Hospital in Kearney, Nebraska at the age of 79 years, eleven months and eight days. Glenn was the eldest of two sons, attended rural grade school at District #62, also known as German Flats Grade School, just one-half mile west of the home place and graduated KPHS in 1954, before returning to ranch with his father. Glenn loved working on the ranch and was exceptionally good with ranch equipment, making hay, and the stock cows as well as dairy cattle over the years. In 1956, Glenn married Mary O. Ludemann and to this union three children were born. The couple made their home initially at the "Hilltop Ranch" on Jackson land just north of Springview, Nebraska and later moved the family to the ranch, one-half mile from his parents, in the Jordan Valley, northwest of Burton. Glenn continued to ranch with his father and brother, John, in a partnership for years. Glenn and Mary moved into Springview in February of 1993. He continued to ranch with his son, Bryan. Mary passed away in August of 1995. Glenn married Rosa (Cady) Graham in 1998. Glenn and Rosa raised two of her grandsons, Trey Whited, and Guhner Kepler in Springview. Later divorced, Glenn moved back to the ranch and lived with his son and daughter-in-law for nearly three years before entering the Rock County Long Term Care Center in Bassett, Nebraska where he resided prior to his death. Glenn was a member of the Keya Paha County Fair Board for 35 years, serving as Secretary for 20 years and President for five years. He also served two terms on the Nebraska Association of Fair Managers. Glenn was active in starting the Willing Workers 4-H group in 1967, in the Burton area, and served as leader for 13 years. Glenn was a lifetime member and served as elder in the Grace Lutheran Church in Burton, a member of the Jordan Valley Cemetery Board, a longtime member of Farm Bureau and a member of District #76 School Board. Glenn loved to dance, and he enjoyed fishing and hunting as well as Sunday dinners with family and friends. Glenn was preceded in death by his parents; his wife Mary; and his brother, John H. Kienke. Glenn is survived by his daughters, Pamela (Tom) Munk, and Tammy (Jim) Ripley, and son, Bryan (JoJo) Kienke, as well as sister-in-law, Sharon Kienke, brother-in-law, Gary (Cristy) Ludemann all of Springview, Nebraska. Brother-in-law, Dick (Judy) Ludemann of Upton, Wyoming; grandsons, Justin Ripley and Micheal Ripley and step-grandson, Jeff Nelson, all of Springview; step-grandson Bryan (Jaccinda) Nelson of Fort Pierre, South Dakota, step-granddaughter Sarah (Brad Sr.) Soflin of Lincoln, Nebraska, step-grandson, Guhner Kepler, Burke, South Dakota, and Trey Whited of Ainsworth, Nebraska. Five step-great-grandchildren, Mariah Nelson, Mahala Nelson, Alexander Nelson, Bradley Soflin, Jr. and Hannah Soflin. Funeral services were held Wednesday April 22, 2015 at 1:30 at Grace Lutheran Church in Burton with Pastor Bill Serr officiating the Lutheran Burial, with Interment in the Mount Hope Cemetery at Springview. Music was provided by Pastor Sam and Mary Courts, formerly of Springview, now of Colorado. Song selections were "In Christ Alone" and "Daddy's Hands." A CD selection of "You Can let Go Daddy" by Crystal Shawarda was played. Casketbearers were: Ernie Larsen, D.D. Linse, Galen Nilson, Rick Lien, Greg Swim, and Joe Leonard Ill. Honorary bearers were all of Glenn's family and friends. Memorials are suggested to the family in Glenn's name for future designation. Hoch Funeral Home of Ainsworth was in charge of the arrangements.

Glenn Louis Kienke was born May 9, 1935, to Louis F. and Fern L. (Jackson) Kienke at home in Burton, Nebraska and departed this life on April 17, 2015 at Good Samaritan Hospital in Kearney, Nebraska at the age of 79 years, eleven months and... View Obituary & Service Information

The family of Mr Glenn L. Kienke created this Life Tributes page to make it easy to share your memories.