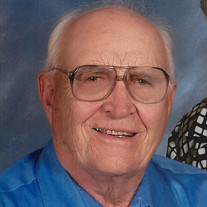 Glenn Francis Haugen, age 90, of Newport, Nebraska passed away September 24, 2018 in Bassett, Nebraska. Glenn was born in Stuart, Nebraska on April 23, 1928 and graduated from Keya Paha County High School in 1946. His home was north of Newport on the Niobrara River and lived there all of his life except for 1951 – 1953 while serving in the Army. Glenn’s love was the ranch where he grew up and with his wife Eileen, raised four daughters. He enjoyed the ranch life and was still working in the hayfield at the age of 89. Glenn had many talents, which included playing the piano, electric guitar, and harmonica. He also enjoyed being a member of the Singing Seniors and church choir. Besides music, he enjoyed woodworking and over the years has made numerous cedar chests, computer desks,gun cabinets, roll-top desks and over 30 jewelry boxes all made from trees grown on the Haugen ranch. Glenn was preceded in death by his parents, Francis and Sadie (Steward) Haugen; and sisters,Lenna Arter and Mildred Stewart. He is survived by his wife, Eileen M. (Gamm) Haugen; daughters, Linda (Sam) Coulter of Bassett, Nancy (Gary) Baker of Hermosa, SD, Betty (Doug) Gilg of Powell, OH, and Bonny (Ted) DeWeese of Towson, MD; Nine grandchildren and two great-grandchildren, along with nieces, nephews, and other family members. Memorial services were held on October 6, 2018 at the United Methodist Church with Pastors Dennis Quigley and Michelle Byerly officiating. Music was provided by Steven Swanson, Marilyn Stewart, and JoAnn Swanson. Special song selections were, “This World is Not My Home”, “It is No Secret”, “This Ole House” and “These Hands”. Honorary bearers were Jeremy Arnholt, Jamison Arnholt, Chris Coulter, Brad Baker, Travis Baker, Brady Gilg, Justin Gilg, Alex DeWeese and Tate DeWeese. Military Honors were provided by the Newport American Legion Post #227 and the Bassett American Legion Post #123. A Private family inurnment was held in the Simpson Cemetery north of Newport. Memorials were suggested to the Newport Volunteer Fire Department. Hoch Funeral Home of Bassett was in charge of arrangements.

Glenn Francis Haugen, age 90, of Newport, Nebraska passed away September 24, 2018 in Bassett, Nebraska. Glenn was born in Stuart, Nebraska on April 23, 1928 and graduated from Keya Paha County High School in 1946. His home was north of Newport... View Obituary & Service Information

The family of Mr. Glenn F. Haugen created this Life Tributes page to make it easy to share your memories.