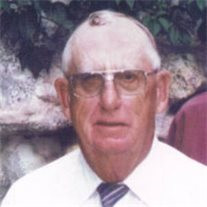 Glen Alvin Schrantz was born November 30, 1925 at his grandparents' home in rural Keya Paha County, Nebraska to Alvin Irvin and Anna May (Painter) Schrantz. He left the constraints of his earthly existence and entered into the presence of his Savior on June 21, 2015 at Stuart, Nebraska at 89 years of age. Glen was raised on various ranches in the Springview and Meadville area. He had a passion for raising horses and worked on the family farm growing up where he learned to do the work with a team of horses. It was during these years that his strong work ethic was developed. He attended several different elementary schools in Keya Paha County. He entered high school in the fall of 1940, completing 1½ years of his high school education before the United States entered World War II. At that time he quit school to stay home and run the family's farm while his brother, Elden, served his country. Even though this ended his formal education, he never quit learning, and he earned his degree from the "school of life". Eventually the war came to an end and Elden returned to resume his duties on the ranch. At that time, Glen accepted employment as a mechanic for W.E. Ripley. Thus began his lifetime career as a mechanic which spanned a period of 40 plus years. In November 1947, at a local dance, fate intervened in the form of a pretty young lady, Vera Dinkins. They married on September 12, 1948. They resided in Springview all their married life with the exception of a few years during the early 50's that they lived in Ainsworth. They had six children, five of whom they raised to adulthood. Glen was always proud of his children, and eventually his grandchildren and great-grandchildren. Glen has always had a good head for business. He began two different businesses, had several sidelines, and bought, improved and sold four ranches as well as various residential properties throughout the years. One of the key factors to his success was Glen's commitment to treating people fairly and honestly. Glen was also known for being an extremely generous man. Many people can testify to his generosity in times of trouble. He has always been known to lend a hand or give a dollar where one was needed. He was called on numerous occasions in times of crisis. He knew everyone in the county and where they lived from his business associations and proved he could be counted on to "do what had to be done" no matter what. Glen was very community-minded, always willing to lend a helping hand to community endeavors. He was active in the Elks Lodge for a number of years. He served the community as a volunteer fireman for many years. He was a proud supporter of Wind Turbine Days as well as an organizer for the Keya Paha County Diamond Jubilee in 1960 and the Keya Paha County Centennial Celebration in 1985. He was always a tireless fund-raiser for community events. He was also a member of the Springview Service Club. Glen served as Deputy Sheriff under Tim Jamison from 1958 until Tim's death in 1969. He loved to recall many of the events from those days. He was elected Keya Paha County Center Commissioner in 1982, and served three terms in this office, retiring at the end of 1994. In his retirement years, Glen took up woodworking. It was a hobby he had played with for many years, but he was able to enjoy the unlimited amount of time he had to work on these projects. He created many beautiful wood items for family and friends, cedar chests, clocks, jewelry boxes, lamps, and many other beautiful creations. His talents and ideas were endless. Gardening also provided a great amount of enjoyment for him during these later years. He kept only a small fraction of the produce grown and enjoyed sharing it with friends, family and neighbors. Glen was preceded in death by his parents; three brothers, Clyde, Elden, and Earl; his sister, Opal Osborn; a son Gary at the age of 12 and an infant granddaughter, Tiffany Schrantz. Those that remain and are thankful to have shared his life are his wife of nearly 67 years, Vera; four daughters, Sandra (Mike) McCoy of Springview, Connie (Tracy) Nemecek of Charlevoix, MI, Patsy (Stan) Cook, Springview, and Nancy (Stan) Boltz of Huron, SD; one son Russell (Kayla) Schrantz of Springview; 10 grandchildren and 16 great- grandchildren; one brother, Rex (Joan) Schrantz of Sarasota, Florida; and many nieces, nephews and a host of friends. Funeral Services were held on Wednesday, June 24, 2015 at Hoch Funeral Home in Ainsworth. Pastor Tim Wyrick and Pastor Gary Munger officiated the service. Music was provided by Elaine Fling, with Stan Boltz singing the song selection of "Amazing Grace". A Saxophone Medley of "How Great Thou Art", "In The Garden" and "Old Rugged Cross" was presented by Stanly Libolt, as well as a recessional instrumental of "Just A Closer Walk With Thee". Pallbearers were, Troy Cook, Zachary Boltz, C.J. Strand, Michael McCoy, Lance Hespe, and Matthew McCoy. Honorary Bearers were, Lyle Forge, Kevin Schoettger, Larry Shepperd, John Forgey, Gary Sell, Newell McCoy, Otto Frauen, and Stan Libolt. Burial was held at Mt. Hope Cemetery in Springview. Memorials were suggested to the family for a memorial directory at Mt. Hope Cemetery.

Glen Alvin Schrantz was born November 30, 1925 at his grandparents' home in rural Keya Paha County, Nebraska to Alvin Irvin and Anna May (Painter) Schrantz. He left the constraints of his earthly existence and entered into the presence of his... View Obituary & Service Information

The family of Glen A. Schrantz created this Life Tributes page to make it easy to share your memories.