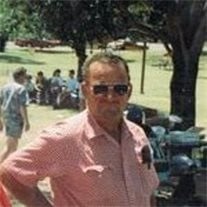 Glen Robert Kloppel was born July 25 1936, to Otto and Rose Kloppel at the Cherry County Hospital in Valentine, NE. He passed away at the Ainsworth Care Center Thursday December 20, 2012. During his childhood he ranched with his folks and siblings, outside of Johnstown NE. He went to grade school at the old Mabelo School, until he moved North of Ainsworth. He graduated from Ainsworth High School in 1955. In 1966, he married Joyce Darlene Austin, the love of his life. Together they raised two children, Angela Denise Christensen and Mark Glen Kloppel. To support his family, Glen had many jobs. He worked on many ranches. Until be started work at the Coop Feed Mill in Ainsworth. He worked there for many years. He then got a job with the Bureau of Reclamation, which took him and his family to Phoenix, Arizona for 15 years, then to Casper, Wyoming for a year. They then came home to Ainsworth, Nebraska to retire. Glen was preceded in death by his wife, Joyce Kloppel; parents, Otto and Rose Kloppel; sister, Arlene Hollopeter, brothers, Morris Kloppel, Kermit Kloppel, and Duane Kloppel. He is survived by sisters, Donna Nelson of Omaha, Bonnie Henne of Valentine; brother, Dean Kloppel of Ainsworth; daughter, Angela Christensen and partner Walter Rouse of Ainsworth; son, Mark Kloppel of Oklahoma; Grand Children, Jessica and husband Travis Pike, Denise Floe, Savana and Ethan Christensen, Blake, Evan, and Kalob Kloppel; Great Grand Children, Paige Floe and Vaden Pike; and lots of nieces and nephews. Glen was a very honest and loving man. He knew no stranger for long. He lived, loved, and laughed. He enjoyed life! Socializing and visiting with family and friends. He will be remembered and missed greatly! Memorial services were held on January 4, 2013 at the American Legion Post #79 of Ainsworth, Nebraska. Father Randy Goeke served as Celebrant. Special CD selections by Mike Baxter were provided. Honorary bearers were all of Glen's famly and friends. Inurnment was held at the Ainsworth Cemetery der the direction of Hoch Funeral Homes of Ainsworth.

Glen Robert Kloppel was born July 25 1936, to Otto and Rose Kloppel at the Cherry County Hospital in Valentine, NE. He passed away at the Ainsworth Care Center Thursday December 20, 2012. During his childhood he ranched with his folks and... View Obituary & Service Information

The family of Glen R. Kloppel created this Life Tributes page to make it easy to share your memories.