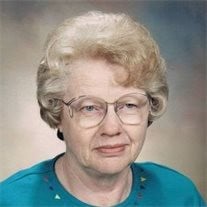 Getha Elaine (Wilkins) Leonard was born Dec. 13, 1937, near Burton, NE, to Owen A. and Hazel (Sylvester) Wilkins. She passed on to her eternal reward on Dec. 15, 2012, at the Rock County Hospital Long Term Care in Bassett. Getha grew up on a farm just south of Burton, where she attended grade school. Her faith in God was nurtured from the beginning at the Burton Assembly of God Church. She had many fond memories of her childhood in Burton. She boarded in Springview while attending Keya Paha County High School, graduating in 1955. Getha enjoyed attending the KPHS Alumni banquet for many years. Her education continued at Chadron State College, from which she graduated three times. In 1957, she completed a two-year teacher training program and began teaching at Bassett Grade School that fall. She graduated with her Bachelor of Science in education in 1963, and her Master of Science in Education in 1971, both of which she attained by attending summer school and taking courses off campus. Getha was a dedicated 1st and then 2nd grade teacher at BGS for 42 years, retiring in 1999 after both of her children had graduated from college. She recited the 23rd Psalm and said a prayer every morning on her way to work. Getha met Klane R. Leonard in 1961, after she laughed to her fellow teacher Mahalia Hart about the bachelor who lived across the street. Mahalia happened to be Klane's cousin, and shared that comment with Klane's mother, who promptly sent her bachelor son across the street to meet this young red-headed teacher. Klane asked Getha to a movie, but since she didn't go to movies, she suggested that they take a drive. They were married in Bassett at the Assembly of God Church on August 13, 1962, and took their honeymoon trip to the Seattle World's Fair in Klane's 1958 Chevy Bel-Air. They lived on the family ranch in the Niobrara River Valley until Getha was moved to the Long Term Care in August, 2011, where she endured the final stages of dementia with grace and dignity. She was the proud and devoted mother of her two children, Kurt and Elaine. Getha attended almost every game, meet, concert, play, or contest in which they competed. Many of her activities reflected her dedication to the field of education: she was member of the Nebraska State Education Association, a life member of the National Education Association, the Niobrara Reading Council and a long-time member of the Alpha Delta Chapter of Delta Kappa Gamma, an honorary teachers' society, also serving as a Rho State Officer for DKG. Getha was a recipient of the DKG Rho State Achievement Award. She was a member of Twilight Belles club and FCE. Getha was a very active member of the Bassett Assembly of God Church and served a term on the state advisory committee for the AG Campgrounds in Lexington. Paving Highway 7, the route she traveled daily to school, became a long-term and ultimately successful project for Getha and her neighbor Carma James. Getha is survived by her husband of 50 years, Klane, and their children Kurt (Brandy) of Bassett and Elaine (Brian) Buescher of Omaha; six grandchildren: Alexander, Elizabeth, Catherine & Anna Buescher of Omaha, and Grace & Sabree Porter of Ainsworth; sisters-in-law Francine Leonard of Galveston, TX and JoAnn Leonard of Rapid City; nieces & nephews: Don White of Omaha; Lloyd J. White of Dallas, TX; Sharon Leonard of Rapid City, SD; Scott Leonard of Enola, PA; Jim Leonard of Portland, OR; and Bruce Leonard of Galveston, TX. She was preceded in death by her parents, brother Keith, sister Opal Jean White, brothers-in-law Kermit & Kenneth Leonard and Lloyd White; sister-in-law Jeanette Leonard; and niece Suzie Kerzman. Graveside Memorial Services were held on Saturday, December 22, 2012 at the Bassett Memorial Park Cemetery in Bassett, Nebraska. Officiating over the service was Pastor Don White. Special music was offered by Kathy Magnussen and Stanley Larson. Honorary bearers were Colleagues at the Bassett Grade School. Hoch Funeral Home of Bassett was in charge of the arrangements.

Getha Elaine (Wilkins) Leonard was born Dec. 13, 1937, near Burton, NE, to Owen A. and Hazel (Sylvester) Wilkins. She passed on to her eternal reward on Dec. 15, 2012, at the Rock County Hospital Long Term Care in Bassett. Getha grew up on... View Obituary & Service Information

The family of Getha E. (Wilkins) Leonard created this Life Tributes page to make it easy to share your memories.