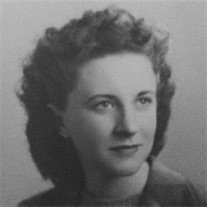 Gertrude L. "Gert" Shade passed away December 5, 2015 at the age of 93 years. She was born May 12, 1922, in a sod house in Keya Paha County, Nebraska to Glenn and Rose (Childs) Masters. She had two older siblings, Paul and Phyllis and two younger siblings, Dale and Janice. Gert graduated from Ainsworth High School in 1939. After graduation, she worked as a telephone operator in Ainsworth and then at the Ainsworth Army Airfield. As World War II unfolded, she traveled to San Diego, California, working at the Naval Base. In 1944, she came back to Ainsworth after which her sweetheart Floyd M. Shade returned home in May upon completing his Army Air Corps tour in England. Within days, they were married in his parent's home in Stuart, Nebraska. Floyd returned to work with Northwestern Bell which took them to South Dakota and the back to Nebraska. Three children were born to their union. They moved to Ogallala in 1952 and stayed for 14 years then moved to Omaha. All three of their children graduated from Ogallala High School. After Floyd's retirement, they returned to Ainsworth and operated Masters' Nite & Day Café and enjoyed their home in Long Pine's Hidden Paradise. Floyd died unexpectedly on November 30, 1980. For the next 35 years, Gert had homes in Lincoln, Nebraska, California and Florida, but always returning to her Nebraska summer home in Hidden Paradise where she resided until 1997. She then moved to Bassett where she lived until 2013 after which she called Cottonwood Villa in Ainsworth her home, She died of cancer in the Papillion Manor at Papillion, Nebraska where she had been for only a little over a month. Gert's interests included dancing in her younger years, painting, playing bridge or King-in-the-Corner, tubing, or entertaining in Hidden Paradise, traveling and special times with her kids and grandkids. Her proudest times were introducing her family and showing her paintings. Gert was preceded in death by her parents, husband, three siblings and a grandson. She is survived by her children, F.J. and wife Joneen of Omaha, Carol Snyder and husband George of Long Pine, and Jack and wife, Charlotte of Eaton Rapids, Michigan; six grandchildren, 14 great-grandchildren and one great-great-granddaughter; a sister, Janice (Masters) Terry and sister-in-law, Jean Masters both of Lincoln; along with cousins, nieces and nephews. Memorial Services will be held in the spring of 2016. Memorial donations are suggested to the Rock County Senior Center. Hoch Funeral Home of Ainsworth is in charge of service arrangements.

Gertrude L. "Gert" Shade passed away December 5, 2015 at the age of 93 years. She was born May 12, 1922, in a sod house in Keya Paha County, Nebraska to Glenn and Rose (Childs) Masters. She had two older siblings, Paul and Phyllis and two... View Obituary & Service Information

The family of Mrs. Gertrude L. "Gert" Shade created this Life Tributes page to make it easy to share your memories.