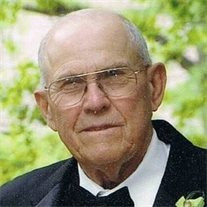 Gerald Everett "G.E." or "Jerry" Aronson, Long Pine, Nebraska, passed away peacefully in his sleep at home on the afternoon of May 27, 2015 at age 89. He was born in Blair, Nebraska on May 2, 1926, and was a graduate of North High School in Omaha, Nebraska. Son of Everett and Alice Aronson, Jerry grew up in North Omaha, and supported his father's auto business, The Auto Exchange, on Farnam Street. He enlisted in the US Navy, and was allowed to graduate from North High School, whence upon he was whisked away to Boot Camp and Navy Training in 1944 at the Great Lakes Naval Station, and then to San Diego, before being assigned as Gunner's Mate on the famous USN LCI #1059, which generated many naval war stories over the years. He was onboard the ship in the Pacific Theater, and always was proud of his service to his country, often recounting his interesting escapades and accomplishments in far off lands. His ship was scheduled to go to Japan for invasion when the atomic bombs were dropped on Hiroshima and Nagasaki. Of late, Jerry was reading about the life history of kamikaze pilots, and we could see his inquisitive nature taking over as he explored the other side of WWII. Jerry married Betty Ann Camilla Wood in 1948, and soon had a family of three, John, Jane, and Joan, who survive his passing. He is also survived by three grandchildren (Chris (Sharla) Aronson, Alex Aronson (Jason) Phillips, and Nikki Baulisch) and one great grand daughter (Leighton Luna Aronson). When his father Everett decided to get out of the auto business, and into farming, Jerry also moved to a farm in western Douglas County, where they both worked together for over two decades. At his most recent birthday party, his son John showed pictures of the farm that were taken recently, and it brought great remembrances of a full and challenging farm life long ago. Jerry and Betty moved to Long Pine to pursue semi retirement in 1981, but Jerry continued to work on many different projects in the area, supporting construction of new homes, trout ponds, roads, bridges, and other projects. He was an accomplished developer, carpenter, plumber, electrician, mason, and farmer. Over the years, Jerry cultivated many deep and lasting friendships with many people who loved the local environment of Long Pine. Jerry was one of the original ecologists, and was always observing nature. He loved to fish. Some of his best memories were fishing with his close friends, on challenging outings where blizzards, ice, road conditions, equipment failures, and other situations demanded strength, stamina, and some luck. But the fishing stories were some of his favorite and most colorful memories. Jerry was always encouraging to others, whistled while he worked, and had many sayings that will transcend his passing. His dream of living and dying in Long Pine, at home, has now been realized. A Visitation and a Time of Sharing was held on Monday, June 1, 2015 at the Hoch Funeral Home in Ainsworth. Graveside Services followed at the Grandview Cemetery at Long Pine with a Military Flag Presentation by Long Pine American Legion & VFW. Charles Messbarger officiated at the service. Casketbearers were: Clint Jones, Rob Messbarger, Jim Welke, Gerald Van Avery, Randy Voss and David Zacharias. Memorials are to be made to Long Pine Fire Department in Jerry's name.

Gerald Everett "G.E." or "Jerry" Aronson, Long Pine, Nebraska, passed away peacefully in his sleep at home on the afternoon of May 27, 2015 at age 89. He was born in Blair, Nebraska on May 2, 1926, and was a graduate of North High School in... View Obituary & Service Information

The family of Mr. Gerald E. "Jerry" Aronson created this Life Tributes page to make it easy to share your memories.