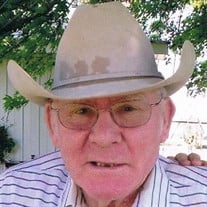 Gary Davis was born on March 13, 1937 to Paul and Goldie (Clark) Davis. He was the fourth of six children, being the first of their family born in a hospital rather than being delivered by a midwife, as were his older brothers. Gary grew up on two different ranches located in southern Brown County. He attended Hillsdale and Raven schools as a young boy. Fond memories included riding horseback to school, often racing his brothers. They carried their lunches along in lard pails and after all that jostling, the biscuits in their lunch would be crumbs. Gary graduated from Ainsworth High School in 1955. One of Gary’s first cars was a 1955 red and white Chevy convertible. He spoke often of that car and regretted selling it. Gary met his wife Edna Mae Koch while they were still in high school. He worked various jobs until marrying Edna Mae on June 30, 1958. Soon after being married, they moved to the family ranch south of Ainsworth where they raised their five children: Deb, Jim, Mike, Shari and Charlie. Gary had a love for the land, and good horses. He developed an eye for good cattle. During his lifetime, Gary strived to perfect his Hereford and then later Angus herds. He built his fences with perfection and expected his sons and grandsons to do the same. One of his favorite pastimes in his early years was coyote hunting with his well-bred greyhounds. In 1977, Gary and Edna Mae moved to the farm south of Ainsworth where they continued to ranch and milk cows. Gary enjoyed haying and continued to do so up to and including last summer at the age of 82. He always welcomed visitors and invited them to meals in his home. The coffee pot was always on. He especially enjoyed holidays and family gatherings. Every one of the grandkids and great grandkids had a special place in his heart. Gary was preceded in death by his parents Paul and Goldie Davis; brothers Bob, Don, and Bill; parents-in-law Glen and Ruth Koch; sisters-in-law Norma and Evelyn, and brothers-in-law Dale Koch and Charlie Hughes; nephews Rick Davis and Bryent Wilkins; niece Donna Davis and nephew-in-law Rocky Hughes. Gary will be greatly missed by Edna Mae, his wife of 61 years; children Deb and husband Allen Sybrant of Bassett, NE, Jim and wife LaTonne of Ainsworth, Mike and wife Ronda of Ainsworth, Shari of Grand Island, NE, and Charlie of Ainsworth; 18 grandchildren, 27 great grandchildren; sister Margie and husband Chet Wilkins and brother Paul Jr. all of Ainsworth; sister- in- law Mary Lou Hughes of Johnstown, NE, nieces, nephews and other relatives, and many friends far and wide. Gary never met a stranger. Memorial Services were held on Friday, January 10, 2020 at the Hoch Funeral Home in Ainsworth with Pastor Russell Thayer and Donnie Painter officiating at the service. The CD Music Selections of “The River” by Garth Brooks, “The Cowboy’s Prayer” by David Allen Coe and “Go Rest High On That Mountain” by Vince Gill” were played. Inurnment will be held at a later date in the Ainsworth Cemetery. Memorials were suggested to the family in Gary’s name. Online condolence may be left for the family by visiting www.hochfuneralhome.com.

Gary Davis was born on March 13, 1937 to Paul and Goldie (Clark) Davis. He was the fourth of six children, being the first of their family born in a hospital rather than being delivered by a midwife, as were his older brothers. Gary grew up... View Obituary & Service Information

The family of Gerald "Gary" W. Davis created this Life Tributes page to make it easy to share your memories.